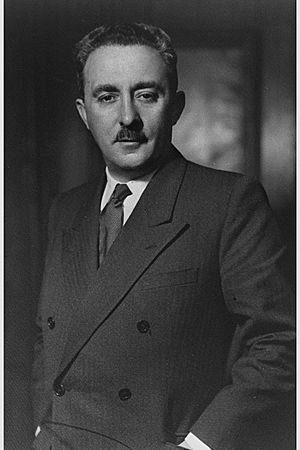 Sharett moved to Ottoman Palestine in 1906. He studied at Istanbul University and the London School of Economics.

In 1920s he worked as a journalist in the United Kingdom. He returned to Mandatory Palestine in 1931, and became a member of the Assembly of Representatives.

He was one of those who signed the Declaration of the Establishment of the State of Israel in 1948.

Sharett was chosen into the first Knesset in 1949, and stayed a Member of Knesset till his death.

He was also in the government. He was Foreign Minister from 1948 to 1956. During this time he was also Prime Minister from January 26, 1954 to November 3, 1955, succeeding fellow party member David Ben-Gurion (last one succeeded Sharett).

All content from Kiddle encyclopedia articles (including the article images and facts) can be freely used under Attribution-ShareAlike license, unless stated otherwise. Cite this article:
Moshe Sharett Facts for Kids. Kiddle Encyclopedia.