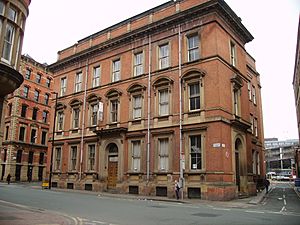 The Mechanics' Institute, 103 Princess Street, Manchester, is notable as the building in which three significant British institutions were founded: the Trades Union Congress (TUC), the Co-operative Insurance Society (CIS) and the University of Manchester Institute of Science and Technology (UMIST). In the 1960s it was occupied by the Manchester College of Commerce. It has been a Grade II* listed building since 11 May 1972.

The institute was established in Manchester on 7 April 1824 at the Bridgewater Arms hotel by a group of wealthy manufacturers and scientists. The purpose of the institution was to provide facilities for working men to learn the principles of science through part-time study. The original prospectus of the institute stated: "The Institution is formed for the purpose of enabling Mechanics and Artisans of whatever trade they may be to become acquainted with such branches of science as are of practical application in the exercise of that trade, and that there is no art which does not depend more or less on scientific principles, and to teach what these are, and to point out their practical application will form the chief object of the Institution." In 1825 the first building in England expressly designed for use as a mechanics' institute was erected for its use in Cooper Street, off Princess Street, Manchester. This was demolished in the early 1970s.

This institute organised the first City exhibition in 1837 and this led to a large number of similar exhibitions in English industrial towns and cities. This institute's base was in Cooper Street and it moved to the current building in 1855. The building was designed by J. E. Gregan in an Italian palazzo style and was Gregan's last work. It consists of three tall storeys with a basement and blind attic storey and is constructed of brick with stone dressings. "It set a standard for the scale of the commercial warehouses which were to follow, but the nobility and purity of the design sets it apart from its neighbours."

The inaugural meeting of the Trades Union Congress was held in the building, 2–6 June 1868. In 1882 it was decided to establish a technical school, the Technical School and Mechanics' Institution; it opened in September 1882. This was the beginning of the institution later known as UMIST.

As of 2002 the building now contained archives from the National Labour Museum.

All content from Kiddle encyclopedia articles (including the article images and facts) can be freely used under Attribution-ShareAlike license, unless stated otherwise. Cite this article:
Mechanics' Institute, Manchester Facts for Kids. Kiddle Encyclopedia.