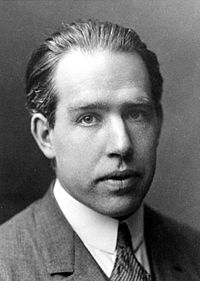 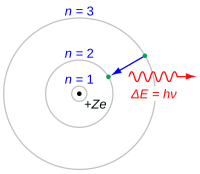 Bohr's model of the atom

Niels Bohr (7 October 1885 – 18 November 1962) was a Danish physicist who helped discover quantum physics, the structure of the atom, and the atomic bomb. Bohr was awarded the Nobel Prize in 1922 for, in short, discovering the quantization of atomic energy levels. He worked also in a project of physicists known as Manhattan Project. He married Margrethe Nørlund in 1912. One of his sons was Aage Bohr, who was also an important physicist. Aage won in 1975 his own Nobel prize. Niels Bohr worked also with Albert Einstein. He is also considered one of the most important physicists of the 20th century.

His full name was Niels Henrik David Bohr. He was born in Copenhagen, Denmark, in 1885. His father was Christian Bohr, who was also professor of physiology at the University of Copenhagen. His mother was Ellen Adler Bohr. She was Jewish and of a rich family of bankers and politicians. Niels was also the brother of Harald Bohr. He was a mathematician and he played in the National Team of Football. Niels liked football also. He played with his brother in many matches. Niels used to be the goal keeper.

In 1903 Bohr began studies of philosophy and mathematics at the Copenhagen University.

In 1905 the Royal Danish Academy of Science organized a competition. Niels Bohr participated with some experiments in surface tension. He used the laboratory of his father in the university, because he knew it since he was a boy.

His work won the prize. For this reason, he decided to stop the studies of philosophy and mathematics and changed to physics.

He received his doctorate in 1911.

Bohr did experiments in the Trinity College in Cambridge under the direction of J.J. Thomson. After it, he went to the University of Manchester under the direction of Ernest Rutherford. On the basis of the theories of Rutherford, he published his theory of electrons. He introduces the theory of electrons traveling in orbits around the nucleus of the atom in 1913 and the chemical properties of the orbit.

He introduced the idea that an electron can drop from a higher energy orbit to a lower one. Then it can emit a photon of discrete energy. This is the basis of quantum theory.

Niels Bohr and his wife Margrethe Nørlund Bohr had four sons. Their oldest died in a tragic boating accident and another died from childhood meningitis. The others went on to lead successful lives, including Aage Bohr, who became a very successful physicist and, like his father, won a Nobel Prize in physics, in 1975.

All content from Kiddle encyclopedia articles (including the article images and facts) can be freely used under Attribution-ShareAlike license, unless stated otherwise. Cite this article:
Niels Bohr Facts for Kids. Kiddle Encyclopedia.