In quantum mechanics, a branch of physics, the Bohr model is the model of the atom proposed by Niels Bohr. Bohr's model is useful only when discussing the behavior of a hydrogen atom. Bohr's model is extremely useful in describing the hydrogen emission spectrum. 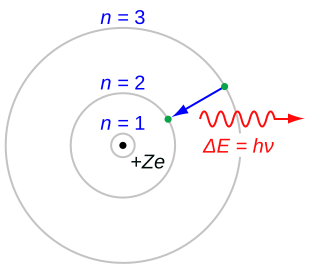 The Bohr model says that the angular momentum of an electron within a hydrogen atom can only be integer multiples of a certain number.

Bohr's model is also useful because it explains the cause of light. Bohr agreed with classical theory that light has a wave-particle duality (meaning that it is made of both electromagnetic waves and particles called photons), but he said that light was given off when an electron in a hydrogen atom jumps from a higher energy level to a lower one. Basically, if an electron with x amount of energy goes to a lower state of energy and loses y energy, then a photon with energy y is emitted by the atom and either becomes light or some other form of radiation.

All content from Kiddle encyclopedia articles (including the article images and facts) can be freely used under Attribution-ShareAlike license, unless stated otherwise. Cite this article:
Bohr model Facts for Kids. Kiddle Encyclopedia.