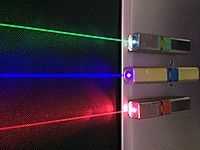 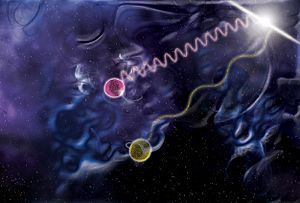 In this illustration, one photon (purple) carries a million times the energy of another (yellow). Credit: NASA/Sonoma State University/Aurore Simonnet

Photons (from Greek φως, meaning light), in many atomic models in physics, are particles which transmit light. In other words, light is carried over space by photons. Photon is an elementary particle that is its own antiparticle. In quantum mechanics each photon has a characteristic quantum of energy.

Photons have a rest mass of 0 (zero). However, Einstein's theory of relativity says that they do have a certain amount of momentum. Before the photon got its name, Einstein revived the proposal that light consists of separate pieces of energy (particles). These particles came to be known as photons.

A photon is usually given the symbol γ (gamma),

Photons are fundamental particles. Although they can be created and destroyed, their lifetime is infinite.

A photon has a given frequency, which determines its color. Radio technology makes great use of frequency. Beyond the visible range, frequency is less discussed, for example it is little used in distinguishing between X-Ray photons and infrared. Frequency is equivalent to the quantum energy of the photon, as related by the Planck constant equation E = h × f

Another property of a photon is its wavelength. The frequency

, and speed of light c are related by the equation

. Wavelength is used in many types of technology.

The quantum energy of different photons is used in infrared technology, and much used for cameras and other machines that use visible and higher than visible radiation. This because these photons are energetic enough to ionize atoms.

The last usable property of a photon is its polarity. If you saw a giant photon coming straight at you, it could appear as a swath whipping vertically, horizontally, or somewhere in between. Polarized sunglasses stop photons swinging up and down from passing. This is how they reduce glare as light bouncing off of surfaces tend to fly that way. Liquid crystal displays also use polarity to control which light passes through. Some animals can see light polarization.

Finally, light has a spin to it. A photon's spin is a subtle feature, and requires expensive equipment to detect.

Light is often created when energy hits an electron. This energy can be in the form of heat, kinetic energy, or any other form. The increase of energy can push an electron up one level in a shell called a "valence". All that this means is that it is unstable there, and like all everything else, wants to be in the lowest energy state. (If being in the lowest energy state is confusing, pick up a pencil and drop it. Once on the ground, the pencil will be in a lower energy state). When the electron drops back down to its lowest energy state, it needs to release the energy that hit it, and it must obey the conservation of energy (energy can neither be created nor destroyed). Electrons release this energy as photons, and at higher intensities, this photon can be seen as visible light.

All content from Kiddle encyclopedia articles (including the article images and facts) can be freely used under Attribution-ShareAlike license, unless stated otherwise. Cite this article:
Photon Facts for Kids. Kiddle Encyclopedia.