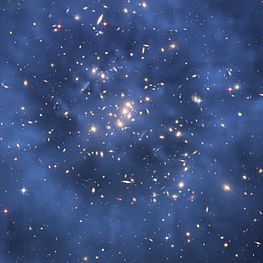 Dark matter is invisible. The effect of gravitational lensing causes multiple images of the same galaxy. A ring of dark matter has been suggested to explain this.
In this image of galaxy cluster (CL0024+17) the dark matter is seen in blue.

Dark matter is a type of matter thought to be responsible for much of the mass in the universe.

The idea arose when astronomers found that the mass of large astronomical objects, and their gravitational effects, was much greater than the mass from the "luminous matter" that contains stars, gas, and dust.

Because dark matter does not seem to give off or reflect light, x-rays, or any other radiation, the instruments that are used to find normal matter (like hot gas, stars, planets, and us) can't find dark matter. It seems that dark matter is not made of the same thing as the matter we see every day on Earth. The only way we can tell if dark matter is there, is by how it affects things we can "see" by gravity.

In 2006, a group of scientists claimed that they had found a way to find dark matter. Since dark matter is supposedly very different from normal matter, it is expected to act differently. The scientists observed two far-away galaxy clusters that had crashed into each other at high speed: normal matter would have been scattered nearby after the collision, while dark matter would not. By measuring gravity, they were able to detect what looked like two clouds of dark matter, with a cloud of normal matter (hot gas) in between them.

All content from Kiddle encyclopedia articles (including the article images and facts) can be freely used under Attribution-ShareAlike license, unless stated otherwise. Cite this article:
Dark matter Facts for Kids. Kiddle Encyclopedia.