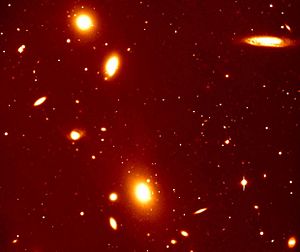 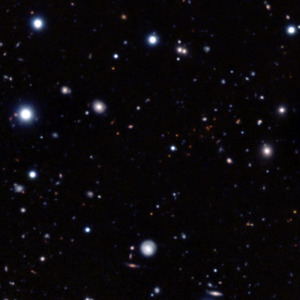 The most distant mature galaxy cluster, taken with ESO's Very Large Telescope in Chile and the NAOJ’s Subaru telescope in Hawaii

Notable galaxy clusters in the relatively nearby universe include the Virgo Cluster (which includes our Local Group), Fornax Cluster, Hercules Cluster, and the Coma Cluster.

Still larger than galaxy clusters are superclusters. A very large aggregation of galaxies known as the Great Attractor, dominated by the Norma Cluster, is massive enough to affect the local expansion of the universe (Hubble's law).

Notable galaxy clusters in the distant, high-redshift universe include SPT-CL J0546-5345, the most massive galaxy cluster ever found in the early universe.

There are three main components of a galaxy cluster. They are:

All content from Kiddle encyclopedia articles (including the article images and facts) can be freely used under Attribution-ShareAlike license, unless stated otherwise. Cite this article:
Galaxy cluster Facts for Kids. Kiddle Encyclopedia.