Polarization (also polarisation) is a property of some types of waves. Some waves have motion in another direction as well as the direction of the wave. In water, for instance, the wave will move across the water, but the wave will also move water up and down on the surface. Light waves are similarly transverse waves though they are also particles. Sound waves do not have polarization, since they are longitudinal waves.

The effects of a polarizing filter on the sky in a photograph. The picture on the right uses the filter.

Light reflected by shiny transparent materials is partly or fully polarized, except when the light is perpendicular to the surface. Polarization was first discovered in 1808 by the mathematician Etienne Louis Malus. A polarizing filter, such as a pair of polarizing sunglasses, can be used to observe this effect by rotating the filter while looking through it at the reflection off of a distant horizontal surface. At certain rotation angles, the reflected light will be reduced or eliminated. Polarizing filters remove light polarized at 90° to the filter's polarization axis. If two polarizers are placed atop one another at 90° angles to one another, very little light can pass through both.

Polarization by scattering is observed as light passes through the atmosphere. The scattered light produces the brightness and color in clear skies. This partial polarization of scattered light can be used to darken the sky in photographs, increasing the contrast. This effect is easiest to observe at sunset, on the horizon at a 90° angle from the setting sun. Another easily observed effect is the drastic reduction in brightness of images of the sky and clouds reflected from horizontal surfaces. This is why polarizing filters are often used in sunglasses. Polarizing sunglasses also show rainbow-like patterns caused by color-dependent birefringent effects, for example in toughened glass (e.g., car windows) or items made from transparent plastics. The role played by polarization in the operation of liquid crystal displays (LCDs) is also frequently apparent to the wearer of polarizing sunglasses, which may reduce the contrast or even make the display unreadable.

Polarization of light is useful, after it has been filtered. A filter will separate light with one type of polarization from other types. Most daylight, or light from a light bulb, has a mix of polarizations (lasers are an exception). The filter works much like trying to put a playing card through a comb - only if the card is turned the right direction will it fit. Light that is turned a different way will be blocked by the filter. Liquid crystal displays (LCDs) use this to block light to make letters or numbers on a display. Glasses that have different polarization filters for each eye can separate light meant for the left eye and for the right eye. This is a common way to make 3D movies and 3D television.

In nature sometimes light that bounces off of a surface has the same polarization - this is called 'glare' from a window or water. A polarization filter on a camera will remove this glare to help see through the window or water (or can increase the glare, depending on how it is turned). 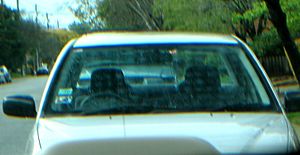 Other electromagnetic waves also have polarization, but it can happen in different ways.

Linear, circular, and elliptical polarizations are three specific types of TEM polarization. They cannot be measured close to an antenna. Far away from an antenna the fields are TEM, so these can be used. They are easy to imagine if you look from at the wave straight on.

Elliptical polarization
This is like the circular polarization, but the magnitude changes as it rotates, forming an ellipse.

All content from Kiddle encyclopedia articles (including the article images and facts) can be freely used under Attribution-ShareAlike license, unless stated otherwise. Cite this article:
Polarization Facts for Kids. Kiddle Encyclopedia.