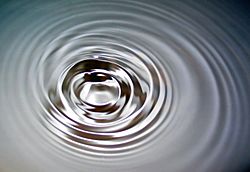 A wave is a kind of oscillation (disturbance) that travels through space and matter. Wave motions transfer energy from one place to another.

Waves are found everywhere in the natural world. Examples of waves: 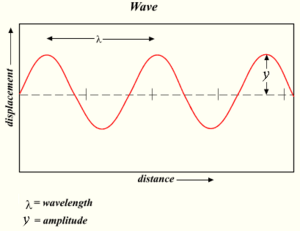 Here is a picture of a sine wave.

Waves have properties that can be measured. All waves can be pictured by adding sine waves.

Complicated waveforms (like the sound waves of music) can be made by adding up sine waves of different frequencies. This is how mp3 audio files are converted from their compressed form into the music we can hear. Complex waves can be separated into sine waves by Fourier analysis.

Usually, after a wave moves through matter, the matter is the same as it was before the wave was introduced, though in some cases, matter can be affected by waves traveling through it. In 1922, Louis de Broglie found out that all waves are also particles, and all particles are also waves.

All content from Kiddle encyclopedia articles (including the article images and facts) can be freely used under Attribution-ShareAlike license, unless stated otherwise. Cite this article:
Wave (physics) Facts for Kids. Kiddle Encyclopedia.