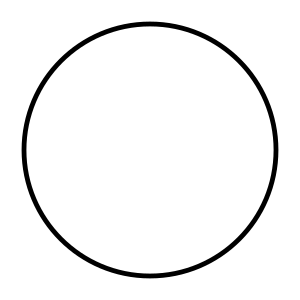 A circle is a round, regular, two-dimensional shape, shaped like a 2D sphere

The centre of a circle is the point in the very middle.

The radius of a circle is a line from the centre of the circle to a point on the side.

All points on the edge of the circle are at the same distance from the centre. In other words, the radius is the same length all the way around the circle. Mathematicians use the letter r for the length of a circle's radius.

The diameter (meaning "all the way across") of a circle is a straight line that goes from one side to the opposite and right through the centre of the circle. Mathematicians use the letter d for the length of this line.

The diameter of a circle is equal to twice its radius (d equals 2 times r).

The circumference (meaning "all the way around") of a circle is the line that goes around the centre of the circle. Mathematicians use the letter C for the length of this line. 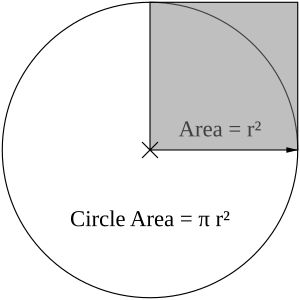 π can also be calculated by only using mathematical methods. Most methods used for calculating the value of π have desirable mathematical properties. However, they are hard to understand without knowing trigonometry and calculus. However, some methods are quite simple, such as this form of the Gregory-Leibniz series:

While that series is easy to write and calculate, it is not easy to see why it equals π. An easier to understand approach is to draw an imaginary circle of radius r centered at the origin. Then any point (x,y) whose distance d from the origin is less than r, calculated by the pythagorean theorem, will be inside the circle:

Finding a set of points inside the circle allows the circle's area A to be estimated. For example, by using integer coordinates for a big r. Since the area A of a circle is π times the radius squared, π can be approximated by using:

All content from Kiddle encyclopedia articles (including the article images and facts) can be freely used under Attribution-ShareAlike license, unless stated otherwise. Cite this article:
Circle Facts for Kids. Kiddle Encyclopedia.