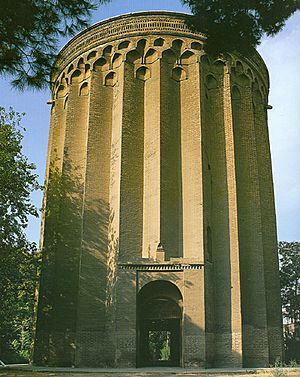 Tuğrul Tower is a 12th-century tower in the city of Rey, Iran. The 20 meters tall brick tower is the tomb of Seljuk ruler Tuğrul Beg, who died in Rey in 1063. The tower is kept by Iran's Cultural Heritage Organization.

All content from Kiddle encyclopedia articles (including the article images and facts) can be freely used under Attribution-ShareAlike license, unless stated otherwise. Cite this article:
Tughrul Tower Facts for Kids. Kiddle Encyclopedia.