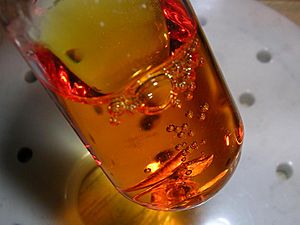 Aqua regia (Royal water in Latin) is a very strong acid. It is made by mixing one part concentrated nitric acid and three parts concentrated hydrochloric acid. The acid was named by alchemists because it can dissolve the noble metals gold and platinum. Tantalum, iridium and a few other metals are not dissolved by it.

Aqua regia was discovered around the year 800AD, by Jabir Bin Hayyan (Geber), when he mixed common salt with vitriol (sulphuric acid). In the Middle Ages it was one of the ways that alchemists tried to find the philosopher's stone.

When Germany invaded Denmark in World War II, the Hungarian chemist George de Hevesy took the Nobel Prize medals of Max von Laue and James Franck to keep them safe. De Hevesy dissolved the medals, which were made of gold, into aqua regia. He did this so the Nazis would not steal them. He placed the jar that held the solution of aqua regia and gold on a shelf in his laboratory at the Niels Bohr Institute. The jar looked the same as hundreds of other jars in the laboratory, so the Nazis thought that all the jars had normal chemicals in them. After the war, de Hevesy returned to the lab, found the jar with the solution, and removed the gold from it. He returned the gold to the Royal Swedish Academy of Sciences, and the Nobel Foundation used the gold to make new medals for Laue and Franck.

Aqua Regia is used in metal etching and scientific analysis. It is also used to clean certain lab machines from tiny metal particles. It is particularly used in the extraction and purification of gold and platinum. Users mix it immediately before use so it won't decompose.

All content from Kiddle encyclopedia articles (including the article images and facts) can be freely used under Attribution-ShareAlike license, unless stated otherwise. Cite this article:
Aqua regia Facts for Kids. Kiddle Encyclopedia.