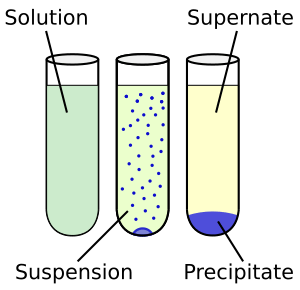 Precipitation is the creation of a solid from a solution. When the reaction occurs in a liquid solution, the solid formed is called the 'precipitate'. The chemical that causes the solid to form is called the 'precipitant'. Without sufficient force of gravity (settling) to bring the solid particles together, the precipitate remains in suspension. After sedimentation, especially when using a centrifuge to press it into a compact mass, the precipitate may be referred to as a 'pellet'. Precipitation can be used as a medium. The precipitate-free liquid remaining above the solid is called the 'supernate' or 'supernatant'. Powders derived from precipitation have also historically been known as 'flowers'. When the solid appears in the form of cellulose fibers which have been through chemical processing, the process is often referred to as regeneration. 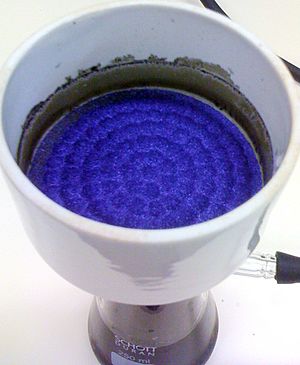 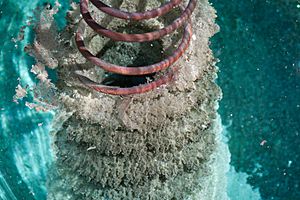 Copper from a wire is displaced by silver in a silver nitrate solution it is dipped into, and solid silver precipitates out.

Precipitation reactions can be used for making pigments, removing salts from water in water treatment, and in classical qualitative inorganic analysis.

All content from Kiddle encyclopedia articles (including the article images and facts) can be freely used under Attribution-ShareAlike license, unless stated otherwise. Cite this article:
Chemical precipitation Facts for Kids. Kiddle Encyclopedia.