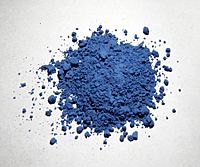 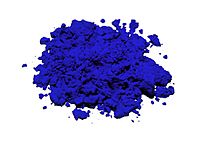 A pigment is something that is added to something else to give it color. Natural pigments can come from just about anything. Pigments can be made from animals, plants, rocks and minerals or even the ground itself, for example clay plus salts. Pigments can also be created by people.

An example of a pigment is ultramarine. It is a powder found in nature. It adds a blue color to paints and dyes.

The first synthetic dye was aniline. Aniline is an organic chemical compound produced in two stages from benzene. It gives a mauve color which was much used for dyeing clothes in the 19th century. It was invented in 1856 by William Henry Perkin. Apparently, it gave a brilliant fuchsia color when first applied, but fades rapidly to mauve.

All content from Kiddle encyclopedia articles (including the article images and facts) can be freely used under Attribution-ShareAlike license, unless stated otherwise. Cite this article:
Pigment Facts for Kids. Kiddle Encyclopedia.