Johannes Vermeer (October 1632 – December 1675) was a Dutch painter who specialized in domestic interior scenes of middle-class life. He was a moderately successful provincial genre painter in his lifetime but evidently was not wealthy, leaving his wife and children in debt at his death, perhaps because he produced relatively few paintings.

Vermeer worked slowly and with great care, and frequently used very expensive pigments. He is particularly renowned for his masterly treatment and use of light in his work. 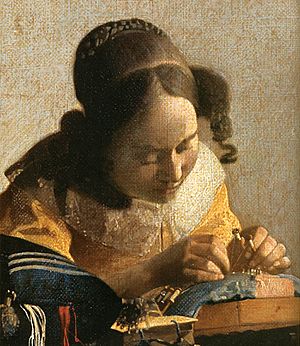 Vermeer painted mostly domestic interior scenes. "Almost all his paintings are apparently set in two smallish rooms in his house in Delft; they show the same furniture and decorations in various arrangements and they often portray the same people, mostly women."

He was recognized during his lifetime in Delft and The Hague, but his modest celebrity gave way to obscurity after his death and he was omitted from further surveys of Dutch art for nearly two centuries.

In the 19th century, Vermeer was rediscovered by Gustav Friedrich Waagen and Théophile Thoré-Bürger, who published an essay attributing 66 pictures to him, although only 34 paintings are universally attributed to him today. Since that time, Vermeer's reputation has grown, and he is now acknowledged as one of the greatest painters of the Dutch Golden Age. 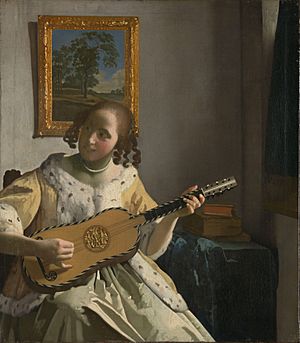 Johannes Vermeer was baptized in the Reformed Church on 31 October 1632, though relatively little was known about Vermeer's life until recently. He seems to have been devoted exclusively to his art, living out his life in the city of Delft. Until the 19th century, the only sources of information were some registers, a few official documents, and comments by other artists.

In April 1653, Johannes Reijniersz Vermeer married Catharina Bolenes (Bolnes). The blessing took place in the quiet nearby village of Schipluiden. At some point, the couple moved in with Catharina's mother, who lived in a rather spacious house at Oude Langendijk, almost next to a hidden Jesuit church. Here Vermeer lived for the rest of his life, producing paintings in the front room on the second floor. His wife gave birth to 15 children.

In December 1675, Vermeer died after a short illness. He was buried in the Protestant Old Church on 15 December 1675. Catharina Bolnes attributed her husband's death to the stress of financial pressures. The collapse of the art market damaged Vermeer's business as both a painter and an art dealer. Vermeer produced a total of fewer than 50 paintings, of which 34 have survived.

All content from Kiddle encyclopedia articles (including the article images and facts) can be freely used under Attribution-ShareAlike license, unless stated otherwise. Cite this article:
Johannes Vermeer Facts for Kids. Kiddle Encyclopedia.