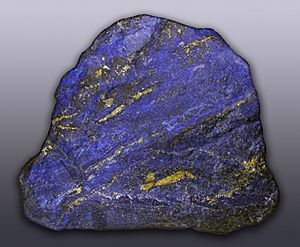 Lapis lazuli is a mineral, and a gemstone. It is formed as a metamorphic rock of the limestone type.

Lapis is famous for its beautiful blue colour: its name means "stone of blue". Lapis Lazuli has been used for many things. Its has been made into beads and used in jewellery since Prehistoric times. It can be carved into statuettes (little sculptures). The major use was as a pigment (colour) in artists' paint. During Medieval and Renaissance times, lapis was ground into powder, and mixed with oil. It was used as the colour for painting the sky, and blue clothes. It can be seen in the fresco paintings of Giotto and the tempera paintings of Fra Angelico.

Lapis lazuli is a metamorphic rock made from several minerals, but mainly Lazurite. Lazurite has been mined for over 6,000 years in Afghanistan. It is also mined at Lake Baikal in Siberia; at Mount Vesuvius in Italy; in Burma; Canada; and the United States.

Afghanistan was the source of lapis for the ancient Egyptian and Mesopotamian civilizations, as well as the Ancient Greeks and Romans. During the height of the Indus Valley civilization about 2000 BC, the Harappan colony now known as Shortugai was established near the lapis mines.

In addition to the Afghan deposits, lapis has been extracted for many years in the Andes (near Ovalle, Chile), the Lake Baikal region of Russia; Siberia; Angola; Argentina; Burma; Pakistan; Canada; India; and in the USA in California and Colorado.

All content from Kiddle encyclopedia articles (including the article images and facts) can be freely used under Attribution-ShareAlike license, unless stated otherwise. Cite this article:
Lapis lazuli Facts for Kids. Kiddle Encyclopedia.