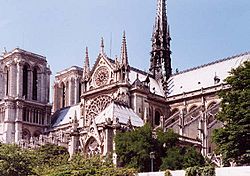 The cathedral of Notre Dame de Paris, whose construction began in 1163, is one of the finest examples of the High Middle Ages architecture.

All content from Kiddle encyclopedia articles (including the article images and facts) can be freely used under Attribution-ShareAlike license, unless stated otherwise. Cite this article:
High Middle Ages Facts for Kids. Kiddle Encyclopedia.