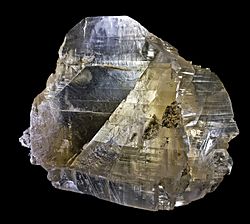 Gypsum is a common mineral, calcium sulfate. Gypsum has been used as a building material for a long time, possibly since the neolithic. Today, it is an ingredient of plaster. It can also be used as a fertilizer.

Commercial quantities of gypsum are found in the cities of Araripina and Grajaú in Brazil; in Pakistan, Jamaica, Iran (world's second largest producer), Thailand, Spain (the main producer in Europe), Germany, Italy, England, Ireland, Canada and the United States. Large open pit quarries are located in many places including Fort Dodge, Iowa, which sits on one of the largest deposits of gypsum in the world, and Plaster City, California, United States, and East Kutai, Kalimantan, Indonesia. Several small mines also exist in places such as Kalannie in Western Australia, where gypsum is sold to private buyers for additions of calcium and sulfur as well as reduction of aluminum toxicities on soil for agricultural purposes.

Crystals of gypsum up to 11 m (36 ft) long have been found in the caves of the Naica Mine of Chihuahua, Mexico. The crystals thrived in the cave's extremely rare and stable natural environment. Temperatures stayed at 58 °C (136 °F), and the cave was filled with mineral-rich water that drove the crystals' growth. The largest of those crystals weighs 55 tons and is around 500,000 years old.

Gypsum is used in a wide variety of applications:

All content from Kiddle encyclopedia articles (including the article images and facts) can be freely used under Attribution-ShareAlike license, unless stated otherwise. Cite this article:
Gypsum Facts for Kids. Kiddle Encyclopedia.