Fort Dodge is a city in and the county seat of Webster County, Iowa, United States, along the Des Moines River. The population was 25,206 in the 2010 census, an increase from 25,136 in the 2000 census. Fort Dodge is a major commercial center for North Central and Northwest Iowa. It is located on U.S. Routes 20 and 169. 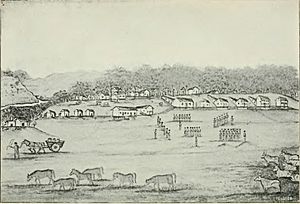 Fort Dodge traces its beginnings to 1850 when soldiers from the United States Army erected a fort at the junction of the Des Moines River and Lizard Creek. It was originally named Fort Clarke but was renamed Fort Dodge because there was another fort with the same name in Texas. It was named after Henry Dodge, a governor of Wisconsin Territory (which included Iowa at the time). The fort was abandoned by the Army in 1853.

The next year William Willams, a civilian storekeeper in Fort Dodge, purchased the land and buildings of the old fort. The town of Fort Dodge was founded in 1869. In 1872 the long and continuing history of gypsum production in Iowa started when George Ringland, Webb Vincent, and Stillman T. Meservey formed the Fort Dodge Plaster Mills to mine, grind, and prepare gypsum for commercial use. The Company constructed the first gypsum mill west of the Mississippi River, at the head of what is now known as Gypsum Creek.

There were 10,275 households of which 27.5% had children under the age of 18 living with them, 39.5% were married couples living together, 13.0% had a female householder with no husband present, 4.4% had a male householder with no wife present, and 43.1% were non-families. 36.8% of all households were made up of individuals and 14.4% had someone living alone who was 65 years of age or older. The average household size was 2.21 and the average family size was 2.89.

The Fort Museum and Frontier Village is located on the southwest edge of Fort Dodge. It is a full-scale recreation of a military outpost on the prairie from the 19th century. It also features a reconstructed village from the same time period. Additionally, The Fort Museum has a replica of the Cardiff Giant, an archaeological hoax sculpted from gypsum mined at Fort Dodge. A "Frontier Days" event is held annually on the Fort Museum grounds. It features a parade, beauty pageant, historical reenactments, a buckskinner camp, and live entertainment. 2014 marked the 40th year of the event.

The Blanden Memorial Art Museum, the first public museum of art in the state of Iowa, is located in the historic Oak Hill district of Fort Dodge. The Blanden, opened June 5, 1932, is renowned as one of the finest small museums in the nation for its extensive permanent collection as well as popular touring exhibits. The permanent collection on display includes European and American artists prints, sculptures and paintings. The museum also offers a wide variety of art classes geared toward children and adults.

The Lizard Creek Blues Society sponsors an annual blues festival, "Blues Under the Trees," every summer, drawing blues musicians from all over the United States.

Oleson Park has woods and hiking trails. The town's recently restored band shell is located here. Oleson Park Zoo boasts a small zoo (closed in 2015) featuring a small population of albino white tailed deer and other animals. It is not an AZA (American Zoo and Aquarium Association) accredited zoo and the zoo's USDA license number 42-C-0128, has been cited over 15 times in the last 2 years by the USDA inspectors.

Snell-Crawford Park (located at Williams Drive and 12th Avenue North) is a local favorite for weekend recreation. It has a disc golf course, three sand volleyball courts, a jogging/walking/bicycling trail, picnic tables, and grills. Soldier Creek runs through the park.

John F. Kennedy Park is the nearest camping facility to Fort Dodge. It has a large campground, a lake with a swimming beach, a playground, and hiking trails. Lakeside Municipal Golf Course, an 18-hole course, is located here.

Fort Dodge is a top tubing destination in the state, offering the swift and clear waters of Lizard Creek, solitude on the Des Moines River from Fort Dodge to the Dolliver Memorial State Park, and the nearby lake at Brushy Creek.

All content from Kiddle encyclopedia articles (including the article images and facts) can be freely used under Attribution-ShareAlike license, unless stated otherwise. Cite this article:
Fort Dodge, Iowa Facts for Kids. Kiddle Encyclopedia.