Clarabell the Clown facts for kids 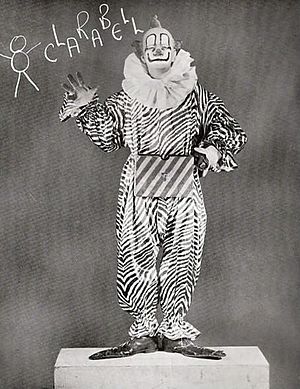 Clarabell the Clown is a clown character who was part of the main cast on the 1947-1960 series The Howdy Doody Show. Clarabell, who wore a baggy, striped costume, communicated through mime and by honking a horn for "yes" or "no". Clarabell would also spray fellow cast member Buffalo Bob Smith with seltzer.

Three actors played Clarabell on a regular basis. The first was Bob Keeshan, who later became Captain Kangaroo. Keeshan was succeeded by Robert "Nick" Nicholson, who also played the character of J. Cornelius Cobb on The Howdy Doody Show. Lew Anderson was the third and last person to play Clarabell. Anderson played the character from 1954 until the series' final episode on September 24, 1960. Anderson returned to play Clarabell in the short-lived 1976–77 New Howdy Doody Show and in the 1987 40th anniversary special, and in later years in many personal appearances with Buffalo Bob Smith. In addition, Dayton Allen, Bill LeCornec, and others played Clarabell in the early years if Keeshan was busy doing something else for the show.

Many attempts were made to find out the real face behind Clarabell. In season 2, #33 of Happy Days, Richie Cunningham is able to get a candid shot of Clarabell (played by Robert Brunner) without his makeup, but chooses to destroy it after Buffalo Bob personally asks him to keep the actor's face concealed from the public. (Based upon the period in which Happy Days is set, Lew Anderson would have been portraying Clarabell during that time.)

Buffalo Bob Smith and the Kids of the Peanut Gallery sang a song about Clarabell, sung to the tune of "Mademoiselle from Armentières".

Throughout the entire series run Clarabell had no lines of dialogue; he often pantomimed, using hand gestures and facial expressions which were understood (and translated to the audience) by Buffalo Bob and the cast; Clarabell's only means of audible communication was a small toy horn he always carried. But during the series finale that aired on September 24, 1960, Clarabell repeatedly pantomimed that he had a very big surprise for the viewers. Throughout the special hour-long episode, the rest of the cast tried to guess Clarabell's surprise, but only Mayor Phineas T. Bluster found out, having been told by Clarabell himself as an act of kindness, but then being sworn to secrecy.

It was only in the episode's final moments that Clarabell, still gesturing and using his horn, revealed to Howdy Doody and Buffalo Bob that he could actually speak. Amazed, Bob excitedly told Clarabell to prove it then and there as he would never get another chance. His lips quivered as the camera slowly moved in for a close-up on his face; a drum and cymbal roll grew louder and abruptly stopped right before Clarabell whispered, "Goodbye, kids." A tear could be seen in Clarabell's right eye as the screen faded to black. There were sounds of sobbing as a celeste version of "Auld Lang Syne" quietly played over the end credits. Bob Smith later recalled that even some of the more intractable members of the show's technical crew were fighting back a tear at that highly emotional moment.

All content from Kiddle encyclopedia articles (including the article images and facts) can be freely used under Attribution-ShareAlike license, unless stated otherwise. Cite this article:
Clarabell the Clown Facts for Kids. Kiddle Encyclopedia.