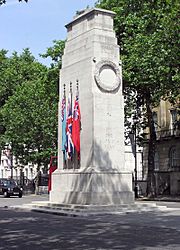 The Cenotaph, in Whitehall, London, is made from Portland stone. 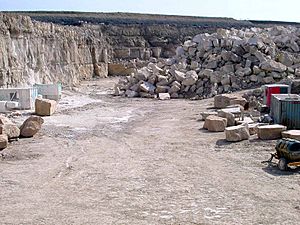 Portland Stone quarry on the Isle of Portland 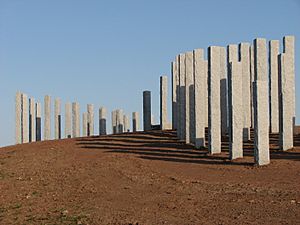 Portland limestone is a limestone which was deposited in the latest stage of the Upper Jurassic period. It was first found on the Isle of Portland, Dorset. However, it occurs over a much wider area, including France.

The strata are beds of white-grey limestone separated by beds of chert.

Portland limestone was formed in a shallow, warm, sub-tropical sea on the continental shelf of what is now western Europe.

Limestones are mostly made of calcium carbonate. This comes originally from the bodies of many small organisms which build their shells or framework out of CaCO3 crystals. An example is the type of protist called coccolithophores.

"[Coccolithophores] were the first organisms to bring about a steady rain of calcium carbonate from the upper, illuminated zone of the ocean towards the deep sea".p144

On the continental shelves of the world photosynthetic organisms, like coccoliths, bacteria, and algae, produce calcium carbonate. Many animals, like bivalves and coral reefs, then use it to make their shells or other structures. Carbonates are rocks formed from these sources, plus any CaCO3 which is precipitated out of solution.

Florida Bay, the shallow lagoon behind the Florida Keys, is a model for the conditions which produced limestones on the continental shelf. Of course, all the species were somewhat different then but, as an ecosystem, it is similar.

In the Florida Bay a type of flowering plant called sea grass is in abundance. Also in abundance is white, milky water full of calcium carbonate. This is mainly formed by Melobesia, a small red alga which lives on the sea grass.p151 Finally, the organisms produce huge amounts of slime, which is a polysaccharide. There is good reason to think the slime is produced by microorganisms to control the way their carbonate skeletons are formed.p139

Carbonate rocks are different in different places and at different times. This is because varied organisms lived there and produced the carbonate. Also various events happened, like underwater landslides and earthquakes, which disrupted the beds. Sometimes the deposition of carbonate was interrupted, and different organisms produced silica, which we see as beds of chert.

In the Portland sandstone, much of the limey mud was laid down with bits and pieces of shells or sand. These became coated with layers of lime mud, and formed small balls (less than 0.5 mm diameter). Over time, countless billions of these balls, known as "ooids" or "ooliths", became partly cemented together by more calcite, to form the oolitic limestone we call Portland limestone.

As a building stone

It has been widely used as a building stone in the British Isles, though it is relatively expensive.

It was used seen in major public buildings, such as Buckingham Palace, St Paul's Cathedral and the British Museum. It is also exported to many countries. Portland stone is used in the United Nations headquarters building in Manhattan, for example.

Portland stone is hard enough to resist weathering but soft enough to be worked (cut and carved) by stonemasons. This is one of the reasons why it is so good for monuments and architecture.

In 1824 Joseph Aspdin invented a cement by burning a mixture of limestone and clay. The limestone he used was Portland linestone, and so he patented the term Portland Cement. Builders quickly recognised that it was better than older cements, although more expensive. It is still widely used in the building trade today.

All content from Kiddle encyclopedia articles (including the article images and facts) can be freely used under Attribution-ShareAlike license, unless stated otherwise. Cite this article:
Portland limestone Facts for Kids. Kiddle Encyclopedia.