Coplay is a borough in Lehigh County, Pennsylvania, six miles (10 km) northwest of Allentown. It is part of the Lehigh Valley region of the state. In 1900, 1,581 people lived in Coplay; in 1910, 2,670 people lived there. The population was 3,387 at the 2000 census. Coplay is included in the Allentown-Bethlehem-Easton, PA-NJ Metropolitan Statistical Area, which is also included in the New York City-Newark, New Jersey, NY-NJ-CT-PA Combined Statistical Area. 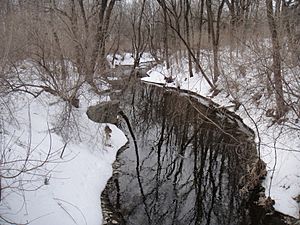 Coplay was part of the 400 acres (1.6 km2) of land John Jacob Schreiber bought from the William Penn heirs in 1740. For a long time it was known as Schreibers. Later it was known as the Lehigh Valley, because of the Lehigh Valley Iron Furnaces that were located here. Lehigh Valley was then changed to Coplay. This name came from "Kolapechka". The son of the Indian chief, Paxanosa, who lived at the head of the creek near Schnecksville. The Borough of Coplay seceded from Whitehall Township in 1869 and was incorporated as a borough on April 7, 1869.

Gradually Coplay changed from a farming area into an Industrial Community. The Thomas Iron Company started the change. They brought in workers and built homes for them. When the Iron Company was liquidated, other industries gradually came to Coplay; the Cement Mill, the Silk Mill, the Cigar Factory and Knitting Mill.

Coplay became a "melting pot" of many nationalities. The Pennsylvania Dutch and Germans, who were the agricultural element. Due to growth of the Iron Industry, immigrants from Ireland came. Then, in the early 1900s, the Cement Mills attracted immigrants from Austria, Hungary, Czechoslovakia, Poland, and the Ukraine.

On April 7, 1969, the borough celebrated its centennial anniversary. A celebration was held from June 15-21 in the town.

The Coplay Cement Company Kilns was added to the National Register of Historic Places in 1980.

All content from Kiddle encyclopedia articles (including the article images and facts) can be freely used under Attribution-ShareAlike license, unless stated otherwise. Cite this article:
Coplay, Pennsylvania Facts for Kids. Kiddle Encyclopedia.