Winnemucca is the only incorporated city in, and is the county seat of, Humboldt County, Nevada, United States. As of the 2010 census, the city had a total population of 7,396, up 3.1 percent from the 2000 census figure of 7,174. Interstate 80 passes through the city, where it meets U.S. Route 95.

The town was named for the 19th-century Chief Winnemucca of the local Northern Paiute tribe, who traditionally lived in this area. He and his band had a camp near here. Winnemucca, loosely translated, means "one moccasin." The chief's daughter, Sarah Winnemucca, was an advocate for education and fair treatment of the Paiute and Shoshone tribes in the area. Their family all learned to speak English, and Sarah worked as an interpreter, scout and messenger for the United States Army during the Bannock War of 1878. In 1883 Sarah Winnemucca published the first autobiography written by a Native American woman, based on hundreds of lectures she'd given in the Northeast and mid-Atlantic. It has been described as "one of the most enduring ethno-historical books written by an American Indian."

On September 16, 1868, the Central Pacific Railroad reached Winnemucca, and was officially opened on October 1 of that year. It was on the First Transcontinental Railroad. It was part of the transcontinental line.

Basque immigrants worked as sheep-herders starting in the mid-19th century. In honor of this heritage, Winnemucca hosts an annual Basque Festival.

According to a billboard along State Route 140 (the "Winnemucca to the Sea Highway"), Winnemucca styles itself "The City of Paved Streets".

Winnemucca is home to the Buckaroo Hall of Fame and Heritage Museum. It is also the headquarters of the Flawedcast Network.

In the late 19th and early 20th centuries, Winnemucca had a vibrant Chinatown. The Chinese originally came to the area as workers on the transcontinental Central Pacific Railroad, which reached Winnemucca in 1868. Some remained or returned to settle. During the 1890s, around 400 Chinese formed a community in the town. Among their prominent buildings was the Joss House on Baud Street, a place of worship and celebration. In 1911 the community was visited by Sun Yat-Sen, later to become Chinese president. He was on a fund-raising tour of the United States to help the Xinhai Revolution. The Joss House, the last structure associated with Chinatown, was demolished on March 8, 1955, by order of the Winnemucca City Council. 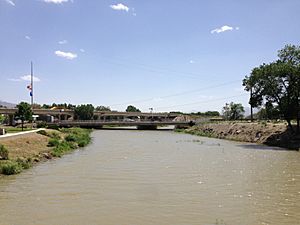 According to the United States Census Bureau, the city has a total area of 9.4 square miles (24.3 km2), all land.

Winnemucca's climate is semi-arid (Köppen climate classification BSk), averaging a mere 8.28 in (210 mm) of precipitation annually. Summer days tend to be hot, but the temperature drops significantly at night. Winters are cold with generally light snow, with 20.9 in (53 cm) falling during a typical year. The highest recorded temperature in Winnemucca was 109 °F (43 °C), on July 11, 2002, and the lowest recorded temperature was −37 °F (−38 °C) on December 22, 1990. Freezing temperatures have been observed in every month of the year. 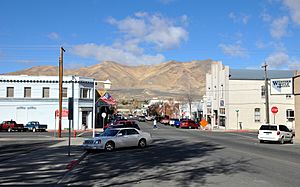 Basque Americans make up 4.2% of the population of Winnemucca, the highest percentage of any city in the United States.

There were 2,736 households, out of which 37.8% had children under the age of 18 living with them, 53.9% were married couples living together, 8.6% had a female householder with no husband present, and 33.3% were non-families. 27.1% of all households were made up of individuals, and 8.7% had someone living alone who was 65 years of age or older. The average household size was 2.60 and the average family size was 3.21. 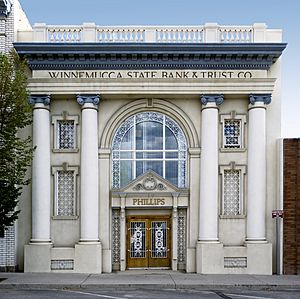 Winnemucca State Bank and Trust building is listed on the National Register of Historic Places. 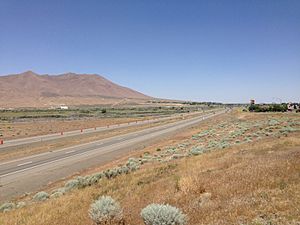 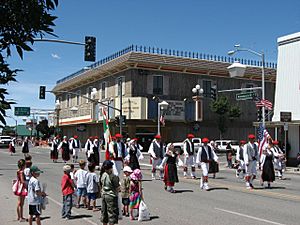 Amtrak, the national passenger rail system, provides service to Winnemucca. The California Zephyr provides a daily service in both directions between San Francisco and Chicago. The Winnemucca passenger rail station, at 209 West Railroad Street, is unstaffed and on-site ticket sales are not available.

Historically, Winnemucca was a station on the Transcontinental Railroad.

Winnemucca is near the half-way point between Salt Lake City and San Francisco along Interstate 80, which passes through town. US Route 95 also goes through Winnemucca.

Local aviation needs are served by the Winnemucca Municipal Airport, located about 5 miles southwest of downtown. There are no scheduled passenger services. The closest commercial airport is Reno–Tahoe International Airport in Reno.

Many of Winnemucca's residents are employed by mining companies such as Newmont and Barrick Gold or by companies serving the mining industry. Carry-On Trailer employs over 100 residents at their manufacturing facility in the Airport Industrial Park. Other employers include the many casinos, hotels and restaurants located in the city.

Winnemucca has a public library, a branch of the Humboldt County Library.

All content from Kiddle encyclopedia articles (including the article images and facts) can be freely used under Attribution-ShareAlike license, unless stated otherwise. Cite this article:
Winnemucca, Nevada Facts for Kids. Kiddle Encyclopedia.