Berrima is a historic village in the Southern Highlands of New South Wales, Australia, in Wingecarribee Shire. The village, once a major town, is located on the Old Hume Highway between Sydney and Canberra. It was previously known officially as the Town of Berrima. It is close to the three major towns of the Southern Highlands: Mittagong, Bowral and Moss Vale.

The name Berrima is believed to derive from an Aboriginal word meaning either "southward" or "black swan". 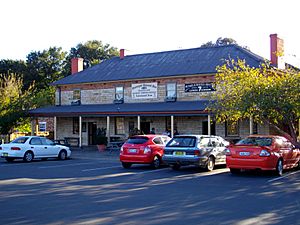 The Surveyor General Inn at Berrima was established in 1834 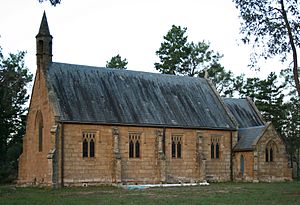 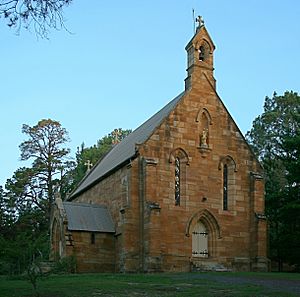 The area around Berrima was once occupied by the Dharawal Aborigines. They had been driven off or killed by the 1870s.

The Wingecarribee River and the area was first visited during the late 1790s, including a 1798 expedition led by an ex-convict, John Wilson. However, John and Hamilton Hume rediscovered the area in 1814. The area was explored by Charles Throsby in 1818. Runs were taken up soon after, including by one by Charles Throsby. Harper’s Mansion, which is on a hill overlooking the town, was built from 1829–1830. Bong Bong had been planned as a major town for the county but, as it was flood prone, the New South Wales surveyor-general Thomas Mitchell chose Berrima townsite on the road running south from Sydney to Goulburn with the intention that the town be the chief centre for southern New South Wales. The survey was conducted in 1830 and the town plan was approved in 1831. As well as its being an administrative centre, there were ambitions that the town might become a commercial and manufacturing centre, "where the wool of Argyle and Camden might be made into cloth and the hide into leather".

The courthouse (see below) was built between 1833 and 1838. The gaol (see below) was built from 1835 by convict labour and opened in 1839. The Surveyor General Inn was built in 1834. It has been continuously licensed since 1839 and its claim to being the earliest hotel rests on its continual licence and being in the original building. Berrima prospered as being at a point on the Old Hume Highway, and there were fourteen hotels in or near the town in the 1840s. However, because the construction of the railway bypassed the town, the population decreased — no new houses were built for a hundred years. In 1896, Sir Henry Parkes, premier of New South Wales, planted an oak tree near the post office.

There are many historic buildings in the town and the village as a whole is listed on the Register of the National Estate. Other notable buildings include the Holy Trinity Anglican Church designed by Edmund Blacket and built in 1849; and the St Francis Xavier Catholic Church built 1849-51 designed by Augustus Pugin, a notable British architect of Gothic-revival buildings. The Berrima Village Trust was established in 1963 to preserve historic buildings. 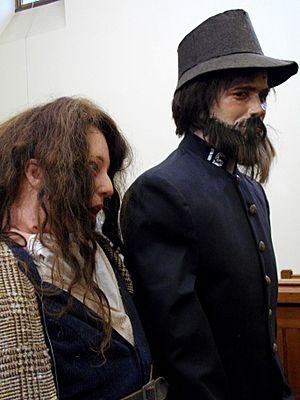 Simulation of colonial-era defendants in the dock

Berrima Court House was built between 1836 and 1838. It was designed by the colonial architect Mortimer Lewis in a Roman style. Four Doric columns support a classical pediment. The building is now stylistically classified as Georgian. It is built of sandstone. A number of problems arose during construction, the first architect having resigned and a succession of three builders being contracted.

The first quarter-sessions were held at the court house in 1841, and the first trial by jury in the colony of New South Wales was held here. The assize courts were continued for only seven years. In 1850 the district court moved to Goulburn, south of Berrima. Minor courts continued at Berrima until 1873. 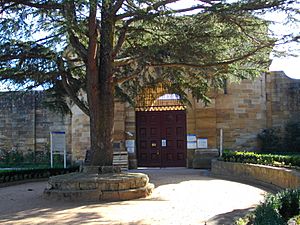 The old Berrima Gaol was, in its latter days, a training centre for female convicts 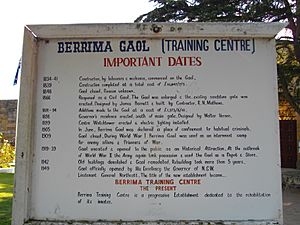 This notice outside the building outlines the gaol's historical timeline

Berrima Gaol was built over five years with much work done by convicts in irons. Conditions at the gaol were harsh, prisoners spent most of their days in cells and the only light was through a small grate set in the door. In 1866 the gaol was renovated to the standards described by the prison reform movement for a "model prison". However, Berrima gaol had solitary confinement cells which measured 8 feet by 5 feet, some smaller, where it was intended that all prisoners spent one year. In 1877 a royal commission was held to investigate allegations of cruelty by the prison authorities but the complaints were not upheld.

During World War I the army used Berrima Gaol as a German-prisoner internment camp. Most of the 329 internees were enemy aliens from shipping companies. There were German officers from Rabaul, German New Guinea (what is now Papua New Guinea) and also officers from the light cruiser SMS Emden.

The correctional centre was used most recently as an all-female low-to-medium security prison. In the 2011 NSW State Budget, the Government announced that the centre would be closed, which took effect on 4 November 2011. The Centre is scheduled to re-open in September 2016.

All content from Kiddle encyclopedia articles (including the article images and facts) can be freely used under Attribution-ShareAlike license, unless stated otherwise. Cite this article:
Berrima, New South Wales Facts for Kids. Kiddle Encyclopedia.