Goulburn is a regional city in the Southern Tablelands of the Australian state of New South Wales, approximately 195 kilometres (121 mi) south-west of Sydney, and 90 kilometres (56 mi) north-east of Canberra. It was proclaimed as Australia's first inland city through letters patent by Queen Victoria in 1863. Goulburn had a population of 23,835 at June 2018. Goulburn is the seat of Goulburn Mulwaree Council.

Goulburn is a railhead on the Main Southern line, a service centre for the surrounding pastoral industry, and also stopover for those travelling on the Hume Highway. It has a central park and many historic buildings. It is also home to the monument the Big Merino, a sculpture that is the world's largest concrete-constructed sheep.

Goulburn was named by surveyor James Meehan after Henry Goulburn, Under-Secretary for War and the Colonies, and the name was ratified by Governor Lachlan Macquarie. The Mulwaree People are the original people of the land they belonged to the Ngunawal and Gandangara language groups, a Murring/Wiradjuri word indicating a special Indigenous cultural area.

The colonial government made land grants to free settlers such as Hamilton Hume in the Goulburn area from the opening of the area to settlement in about 1820. Land was later sold to settlers within the Nineteen Counties, including Argyle County (the Goulburn area). The process displaced the local indigenous Mulwaree population and the introduction of exotic livestock drove out a large part of the Aboriginal peoples' food supply.

The Mulwaree People lived throughout the area covering Goulburn, Crookwell and Yass and belong to the Ngunawal language group. To the north of Goulburn Gundungurra was spoken within the lands of the Dharawal People. This was due to Gundungurra people of the Blue Mountains being driven south from their traditional land due to Governor Macquarie's parties sent to massacre the Dharawal and Gundungurra People.

Their neighbours were the Dharawal to their north and Dharug surrounding Sydney, Darkinung, Wiradjuri Ngunawal and Thurrawal, (eastwards) peoples. The reduction of the food supply and the introduction of exotic diseases, substantially reduced the local indigenous population. Some local Aborigines survived at the Tawonga Billabong Aboriginal Settlement established under the supervision of the Tarago police. In the 1930s the local billabong dried up and the Aboriginal people moved away although some have, over time, made their way back to their traditional lands.

The first recorded settler in Goulburn established 'Strathallan' in 1825 (on the site of the present Police Academy) and a town was originally surveyed in 1828, although moved to the present site of the city in 1833 when the surveyor Robert Hoddle laid it out.

George Johnson purchased the first land in the area between 1839 and 1842 and became a central figure in the town's development. He established a branch store with a liquor licence in 1848. The 1841 census records Goulburn had a population of 665 people, 444 males and 211 females. This number had jumped to 1,171 inhabitants by 1847, 686 males and 485 females. It had a courthouse, police barracks, churches, hospital and post office and was the centre of a great sheep and farming area.

A telegraph station opened in 1862, by which time there were about 1,500 residents, a blacksmith's shop, two hotels, two stores, the telegraph office and a few cottages. The town was a change station (where coach horses were changed) for Cobb & Co by 1855. A police station opened the following year and a school in 1858. Goulburn was proclaimed a municipal government in 1859 and was made a city in 1863.

The arrival of the railway in 1869, which was opened on 27 May by the Governor Lord Belmore (an event commemorated by Belmore Park in the centre of the city), along with the completion of the line from Sydney to Albury in 1883, was a boon to the city. Later branchlines were constructed to Cooma (opened in 1889) and later extended further to Nimmitabel and then to Bombala, and to Crookwell and Taralga. Goulburn became a major railway centre with a roundhouse and engine servicing facilities and a factory which made pre-fabricated concrete components for signal boxes and station buildings. The roundhouse is now the Goulburn Rail Heritage Centre with steam, diesel and rolling stock exhibits. CFCL Australia operate the Goulburn Railway Workshops.

St Saviour's Cathedral, designed by Edmund Thomas Blacket, was completed in 1884 with the tower being added in 1988 to commemorate the Bicentenary of Australia. Though completed in 1884, some earlier burials are in the graveyard adjacent to the cathedral. St Saviour's is the seat of the Bishop of Canberra and Goulburn. The Church of SS Peter and Paul is the former cathedral for the Roman Catholic Archdiocese of Canberra and Goulburn.

The Goulburn Viaduct was built in 1915 replacing an earlier structure. This brick arch railway viaduct spanning the Mulwaree Ponds is the longest on the Main Southern railway line and consists of 13 arches each spanning 13.1 m (43 ft). 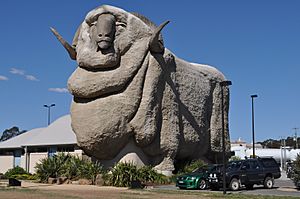 Goulburn holds the unique distinction of being proclaimed a City on two occasions. The first, unofficial, proclamation was claimed by virtue of Royal Letters Patent issued by Queen Victoria on 14 March 1863 to establish the Diocese of Goulburn. It was a claim made for ecclesiastical purposes, as it was required by the traditions of the Church of England. The Letters Patent also established St Saviour's Church as the Cathedral Church of the diocese. This was the last instance in which Letters Patent were used in this manner in the British Empire, as they had been significantly discredited for use in the colonies, and were soon to be declared formally invalid and unenforceable in this context. Several legal cases over the preceding decade in particular had already established that the monarch had no ecclesiastical jurisdiction in colonies possessing responsible government. This had been granted to NSW in 1856, seven years earlier. The Letters Patent held authority only over those who submitted to it voluntarily, and then only within the context of the Church—it had no legal civil authority or implications. An absolute and retrospective declaration to this effect was made in 1865 in the Colenso Case, by the Judiciary Committee of the Privy Council.

However, under the authority of the Crown Lands Act 1884 (48. Vict. No. 18), Goulburn was officially proclaimed a City on 20 March 1885 removing any lingering doubts as to its status. This often unrecognised controversy has in no way hindered the development of Goulburn as a regional centre, with an impressive court house (completed in 1887) and other public buildings, as a centre for wool selling, and as an industrial town.

Goulburn has a number of heritage-listed sites, including:

According to the 2016 census of population, there were 22,890 people in Goulburn.

Goulburn is located a small distance east of the peak ridge of the Great Dividing Range and is 690 metres (2,264 ft) above sea level. It is intersected by the Wollondilly River and the Mulwaree River, and the confluence of these two rivers is also located here. The Wollondilly then flows north-east, into Lake Burragorang (Warragamba Dam) and eventually into the Tasman Sea via the Hawkesbury River.

Owing to its elevation, Goulburn has a subtropical highland climate (Cfb) with warm summers and cool winters, and a high diurnal temperature variation. Its climate is variable, though generally dry with maximum temperatures averaging from 11.8 °C (53.2 °F) in July to 28.3 °C (82.9 °F) in January. Rainfall is distributed evenly throughout the year, with an annual average of 542.8 mm (21.4 in). Snow occasionally falls, although rarely in significant quantities due to the slight foehn effect produced by the ranges to the west of Goulburn—namely, those straddling Crookwell. Temperature extremes have ranged from −10.9 to 42.8 °C (12.4 to 109.0 °F).

With a history of water shortages, an 84 km (52 mi) underground water supply pipeline was constructed to pump water from the Wingecarribee Reservoir in the Southern Highlands to Goulburn. This pipeline has a capacity of 7.5 ML per day.

The $54 million water supply pipeline is the largest construction project in the history of Goulburn.

As a major settlement of southern New South Wales, Goulburn was the administrative centre for the region and was the location for important buildings of the district. The first lock-up in the town was built in 1830. In 1832 a postal service commenced in Goulburn, four years after the service was adopted in New South Wales. The first town plan had been drawn up by Assistant Surveyor Dixon in 1828, but the site was moved, as it was subject to flooding. The new town plan was drawn up by Surveyor Hoddle and was gazetted in 1833.

Goulburn's second court house was built in 1847; designed by Mortimer Lewis, the colonial architect. James Barnet, the colonial architect from 1862 to 1890, built a number of buildings in Goulburn. These included the Goulburn Gaol that opened 1884; the current court house that opened in 1887; and a post office in 1881. Barnet's successor, Walter Liberty Vernon, was responsible for the first buildings of Kenmore Hospital, completed in 1894. St Saviour's Anglican Cathedral and Hall were designed by Edmund Blacket. Building started in 1874 and it was dedicated in 1884. It was finally consecrated in 1916. A tower was added in 1988 as part of a Bicentennial project but Blacket's plans included a spire which is yet to be added. E.C. Manfred was a prominent local architect responsible for many of the buildings in the city, including the first public swimming baths opened in 1892; the old Town Hall constructed in 1888; the Goulburn Base Hospital designed in 1886; the old Fire Station built in 1890; the Masonic Temple built in 1928; he also designed the earlier building of 1890 it replaced. Goulburn's first permanent fire station built 1890 and designed by local architect E.C. Manfred. The city was home to Kenmore Hospital, a psychiatric hospital which was finally closed in 2003. Goulburn remains a hub for mental health with facilities now located at the Goulburn Base Hospital.

The roundhouse at Goulburn was a significant locomotive depot both in the steam and early diesel eras. After closure it became the Goulburn Rail Heritage Centre, a railway museum with preserved steam and diesel locomotives as well as many interesting examples of rolling stock. Some minor rail operators such as RailPower have used the site to restore diesel locomotives to working order for main line use.

A former quarry adjacent to the Main Southern railway line in North Goulburn was used to film cliff top scenes in the 2016 film Hacksaw Ridge.

Goulburn is the seat of the Goulburn Mulwaree Shire local government area (LGA) of New South Wales, Australia, formed in 2004. The most recent elections for Council were held on 13 September 2008. Two of the elected Councillors, Max Hadlow and Keith Woodman resigned due to ill health in 2009. A by-election to fill the vacancies was held in June 2009 and resulted in the election of Councillors Geoffrey Kettle and Geoffrey Peterson. Councillor Geoffrey Kettle was elected Mayor, replacing Councillor Carol James, in September 2010.

Goulburn railway station is the southern terminus of the Southern Highlands Line which reaches from Campbelltown and is part of the NSW TrainLink intercity passenger train system. Most services on the line terminate at Moss Vale, some 65 km (40 mi) north-east, meaning Goulburn sees limited passenger service. The station is also served by the long distance Southern XPT and Xplorer trains between Sydey and Griffith, Canberra and Southern Cross railway station in Melbourne. All services are operated by NSW TrainLink.

All content from Kiddle encyclopedia articles (including the article images and facts) can be freely used under Attribution-ShareAlike license, unless stated otherwise. Cite this article:
Goulburn, New South Wales Facts for Kids. Kiddle Encyclopedia.