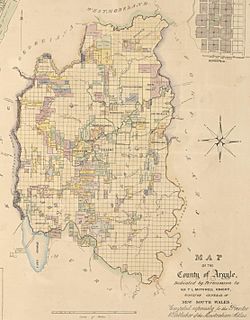 Argyle County was named by Governor Macquarie after his native county in Scotland. He named it while inspecting the area in 1820.

In 1829 the Act for Instituting and regulating Courts of General and Quarter Sessions in New South Wales established courts in the county at Cookbundoon, Goulburn Plains and Inverary. James Byrne was Assistant Surveyor for the County in 1832. In 1835 Argyle had a magistrate and police force.

The Greater Argyle Council was formed in 2004 after a proposal to make a new local government area to focus on the County of Argyle, formed from an amalgamation of the former City of Goulburn and parts of Mulwaree Shire. It was renamed the Goulburn Mulwaree Council in October 2004.

All content from Kiddle encyclopedia articles (including the article images and facts) can be freely used under Attribution-ShareAlike license, unless stated otherwise. Cite this article:
Argyle County Facts for Kids. Kiddle Encyclopedia.