Lake George (or Weereewa in the Ngunnawal language) is an endorheic lake in south-eastern New South Wales, Australia. It is approximately 40 kilometres (25 mi) north-east of Canberra located adjacent to the Federal Highway en route to Goulburn and Sydney. Lake George is also the name of a locality on the western and southern edges of the lake, within the area of the Queanbeyan–Palerang Regional Council.

Lake George is an endorheic lake, as it has no outflow of water to rivers and oceans.

The lake is believed to be more than a million years old. Originally, small streams drained its catchment into the Yass River, but then the Lake George Escarpment rose due to major crustal movement along a strong fault line, blocking this drainage and forming the lake. Lake George has in previous Ice Ages been much larger and deeper.

The thickness of sediment beneath the lake exceeds 250 metres (820 ft), according to a Bureau of Mineral Resources Canberra drilling programme in the 1982/83 summer. The oldest sediments, which lie some distance above the bedrock, were dated at 3–5 million years using spore and pollen analysis and magnetic reversal stratigraphy.

At 25 km (16 mi) long and 10 km (6.2 mi) wide, Lake George is long, largely flat and extremely shallow, with a very small catchment. Resultant evaporation rates as well as a tendency for strong winds to blow the water back on itself explain the mysterious filling and drying episodes on both short term (hours) and long term (years) time scales that have been observed. 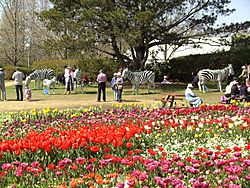 Zebra herd, where it was first installed in 2010

Lake George is the site of an experimental scientific wave behaviour platform established by researchers from the Civil Engineering department of the Australian Defence Force Academy in Canberra.

Lake George has been a popular fishery at times, after high water levels and stockings of fish.

Wine grapes are grown along the western edge of the lake, on the escarpment. Sheep are grazed on the lake when it is dry or nearly so.

In 2010, Canberra artists Alan and Julie Aston installed a herd of zebras on the lake adjacent to the highway stop commemorating Kevin "Dasher" Wheatley VC, used as a "Driver Reviver" site. They were named Stopper, Reviver, Survivor, and Dasher. They were a sensation, but the Government of New South Wales ordered that they be removed, following a complaint from the leaseholder of the land. They reappeared at Floriade in September 2010, along with a baby, George.

The local indigenous people called the lake Werriwa (originally spelled Weereewa in the journals of the explorers who noted the name), which may mean "bad water"; even when full, the lake is one of the saltiest bodies of water in inland NSW, almost as saline as seawater. However, the name is also similar to regional indigenous word for eagle, which often fly there. The first European to discover the lake was Joseph Wild on 19 August 1820, and it was named for King George III on 28 October 1820 by Governor Lachlan Macquarie, who was touring the area as part of a Royal Commission inquiring into the condition of the Colony. 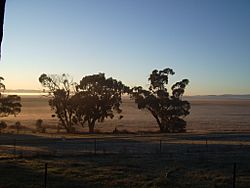 A large and beautiful billabong existed at the northern end of the lake, and in the 1850s it was stocked by the landowner with Murray cod fished out of the Molonglo River at Yarralumla. At some time the billabong overflowed and introduced Murray cod into the lake itself. They bred rapidly, and from the 1850s to the 1890s Lake George abounded with them. The long Federation Drought commenced in the mid-1890s, and by 1902 the lake had dried out completely. In their search for water to survive in, the Murray cod flocked into the mouths of the few small creeks feeding the lake and were killed by the thousands..

One of the original 75 electoral divisions of the Australian House of Representatives in 1901 was named "Werriwa". By 1913, it no longer included the lake, and the electorate is currently centred in the south-western suburbs of Sydney.

In the early 1900s an area immediately to the east of the lake was surveyed as a possible site for the Capital city of Australia. Instead, the Australian Capital Territory and city of Canberra were established some 30 km (19 mi) south-west of the lake.

During World War II, a wooden 'dummy' ship was floated on the lake and used for bombing practice by the Royal Australian Air Force. It is possible that there is still unexploded ordnance settled into the lake bed.

On 8 July 1956 five cadets from the Royal Military College, Duntroon drowned in a yachting accident.

Due to the ongoing drought in Australia, Lake George dried out completely in November 2002, and remained so until February 2010 when it started to refill. The previous time the lake had dried out completely was during a severe drought in the 1940s, although it was partially dry in 1986, leaving large pools of water. When the lake is empty it is used by farmers to graze sheep and cattle. During September 2016, the lake filled for the first time since 1996. In the intervening years the level of water in the lake had never been as high as that in September 2016.

The unusual fluctuations in the water level have given rise to fanciful urban myths that the lake is somehow connected to lakes in Peru or South Africa, although NSW government ecologist Justin Nancarrow theorises that the lake may indeed be connected to the nearby Yass River by subterranean aquifers which pass under the surrounding escarpment, and that this connection may explain the salinity of the river.

All content from Kiddle encyclopedia articles (including the article images and facts) can be freely used under Attribution-ShareAlike license, unless stated otherwise. Cite this article:
Lake George (New South Wales) Facts for Kids. Kiddle Encyclopedia.