The Yass River, a perennial river that is part of the Murrumbidgee catchment within the Murray–Darling basin, is located in the Southern Tablelands and South Western Slopes districts of New South Wales, Australia. 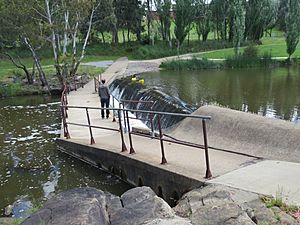 The river rises in rugged country south west of Bungendore, near Wamboin and flows generally north north west then south west, joined by seven minor tributaries, towards its confluence with the Murrumbidgee River into the impounded waters of Lake Burrinjuck, west of Yass; dropping 413 metres (1,355 ft) over its 139-kilometre (86 mi) course.

A number of competing theories exist as to the origin of the name "Yass". It is believed to be named after an Aboriginal Australian commented to explorer, Hamilton Hume, that "Yass boss, plains". An alternative theory is that Yass was named after comments made by Mr Angel, a member of Hume's exploration party, that "Yas, yas, plenty of clear country here". A third theory is that the local Aboriginal Gandangara people used the words Yarrh or Yharr as the name for the river, literally translated to mean "running water".

All content from Kiddle encyclopedia articles (including the article images and facts) can be freely used under Attribution-ShareAlike license, unless stated otherwise. Cite this article:
Yass River Facts for Kids. Kiddle Encyclopedia.