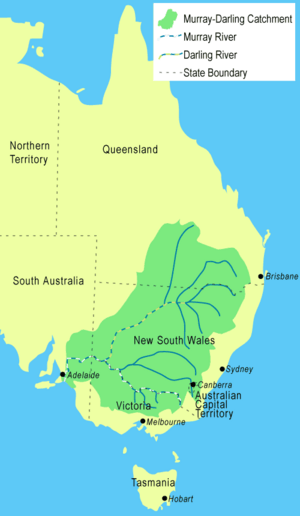 Map of the Murray–Darling Basin

The Murray-Darling Basin is an area in Australia around the Murray and Darling Rivers. Three million Australians inside and outside the basin are directly dependent on its water.

About 6 per cent of Australia's total rainwater falls into the Murray-Darling Basin. About 85 per cent of all irrigation in Australia takes place in the basin, which supports an agricultural industry worth more than $9 billion per annum.

Over two million people live in the Basin.

Rivers in the Murray–Darling basin

All content from Kiddle encyclopedia articles (including the article images and facts) can be freely used under Attribution-ShareAlike license, unless stated otherwise. Cite this article:
Murray-Darling Basin Facts for Kids. Kiddle Encyclopedia.