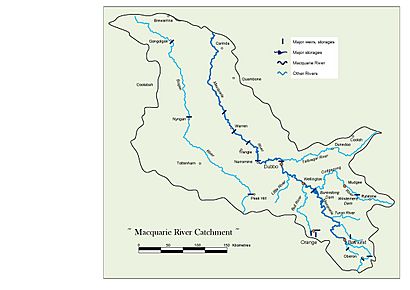 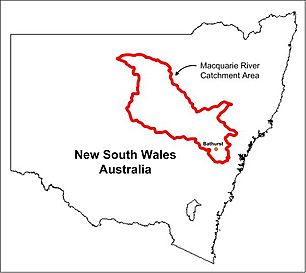 Burrendong Dam is a large dam (capacity 1,190,000 Megalitres) near Wellington which holds the waters of the Macquarie River and its tributaries the Cudgegong River and the Turon River to stop floods and provide water for irrigation. The dam made Lake Burrendong.

The Macquarie River flows for 626 kilometres and drops around 517 metres over its length. Lake Burrendong (346m) is the only dam on the river.

There are 19 creeks that flow into the Macquarie River:

The Macquarie system covers an area of more than 74,000 square kilometres. Over 72% of land is flat, and 17% is hilly. The rest is steep to mountainous, reaching 900 metres. The east boundary is formed by the Great Dividing Range, from near Oberon in the south to Coolah in the north. A mountain ridge goes north-west from the Great Dividing Range for about 400 kilometres, then the boundary turns north.

From Bathurst, near the start of the river it passes the following geographic areas:

Rainfall can vary dramatically over several years. Records show that rainfall can be 200% or less than 50% of the average annual figure. Evaporation varies from less than 1000 mm south-east of Bathurst up to more than 2000 mm at Bourke.

Near Carinda between the Macquarie River and Marra Creek, the oldest evidence of bread making in the world (about 30,000 years old) was found at an ancient lake known as Cuddie Springs.

The upper parts of the Macquarie River were first seen by Europeans in 1813. The river was named for the Governor of New South Wales, Lachlan Macquarie. In 1813 surveyor George Evans wrote in his journal:

Tuesday, 30th November 1813. I have at length reached the Ridge I so much wished to do after walking about 2 Miles, where I had a prospect to the North for a great distance; A Mist arises from a part I suppose to be a River or a large Lagoon about 20 Miles Off;

In 1817-18 John Oxley followed the Lachlan and Macquarie Rivers. In 1828 Charles Sturt proved that Macquarie River ended in marshes. He discovered the Darling River 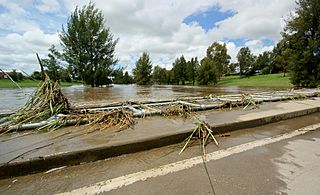 The Macquarie River has a history of flooding. After major floods water can flow past the Macquarie Marshes and into the Barwon-Darling river system upstream of Brewarrina.

Recreational activities are popular along the length of the river particularly in the communities it passes by.

All content from Kiddle encyclopedia articles (including the article images and facts) can be freely used under Attribution-ShareAlike license, unless stated otherwise. Cite this article:
Macquarie River Facts for Kids. Kiddle Encyclopedia.