Mount Canobolas, a mountain on a spur of the Great Dividing Range, is located in the Central Tablelands region of New South Wales, Australia.

With an elevation of 1,390 metres (4,560 ft) above sea level, Mount Canobolas, an extinct volcano, is the highest mountain in the region. Situated 13 kilometres (8.1 mi) southwest of the city of Orange, it is about 250 kilometres (155 mi) west of Sydney.

The northern slopes of the mountain, with fertile volcanic soil, are popular cold-climate wine producing area.

The name comes from two words in the Wiradjuri language (the local Aboriginal language), "gaahna" and "bula". This means "two shoulders" which refers to the summits of Mount Canobolas itself and the subsidiary peak Young Man Canobolas. 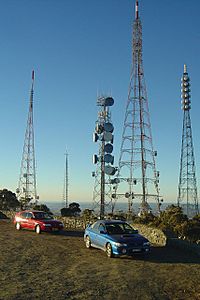 The mountain's geologic history has yielded a variety of landforms which provide a range of environmental habitats, and notably rocky outcrops harbouring rare species of lichens. There are cliff features with waterfalls, such as the popular recreation locality, Federal Falls. Mount Canobolas was listed on the Register of the National Estate because of its geological significance, before the Register was abandoned in 2007.

There is a 360 degree view from the summit, which is often snow-capped in winter. The summit can be seen from up to 100 km away.

The mountain is now part of the 15-square-kilometre (5.8 sq mi) Mount Canobolas Conservation Area, managed by the NSW National Parks & Wildlife Service, which offers various walks: to Bald Hill; to Young Man Canobolas; Federal Falls to Mount Towac, and other locations. The volcanic peaks give wide views and there are some attractive waterfalls.

Since 1962, with the opening of television stations ABCN-1 and CBN-8, the top of the mountain has been dominated by several towers used for communications, radio and television transmissions across large areas of the Central Tablelands and Central Western Slopes regions. These include towers for television transmitters - Australian Broadcasting Corporation, Prime7, Southern Cross Nine, and WIN Television - and for Airservices Australia and the Royal Australian Air Force.

Each year the Orange community runs the Great Volcanic Mountain Challenge, an 11-kilometre (6.8 mi) walk and fun run from the Pinnacle to the Summit of Mount Canobolas by the volcanic plugs of Mount Towac and Young Man Canobolas. The inaugural event was held in 2006.

Mount Canobolas is significant to the Wiradjuri, who are the Indigenous people of the area. On the peak and nearby there are several significant sites, including rock carving, an axe grinding site and campsites.

Fires on the mountain

Another bushfire affected most of the northern area of Mount Canobolas in February 2018, and the entire Mount Canobolas Conservation Area apart from the summit remains closed (as of mid 2020) until the effects of this fire - the danger of falling trees and branches and damage to much of the walking track infrastructure - are rectified.

Bushire frequency on Mount Canobolas is poorly recorded, however it is believed to be quite low. The floristic composition suggests that the vegetation has evolved largely in the absence of regular intense fire. Information from local landholders indicates that the mountain was subjected to annual low intensity burning by previous occupiers to maintain fresh feed for their stock during the 1940s and 1950s.

Mount Canobolas is not, as is sometimes claimed in tourism brochures, the highest point between Australia's Great Dividing Range and Africa, as Mount Zeil in Australia's Northern Territory and Mount Woodroffe in South Australia are further west and higher, and a number of peaks elsewhere on the Great Dividing Range and peaks on Madagascar and Réunion are higher. It is, however, the highest point in a direct east-west line between the Blue Mountains and the western coast of Australia.

All content from Kiddle encyclopedia articles (including the article images and facts) can be freely used under Attribution-ShareAlike license, unless stated otherwise. Cite this article:
Mount Canobolas Facts for Kids. Kiddle Encyclopedia.