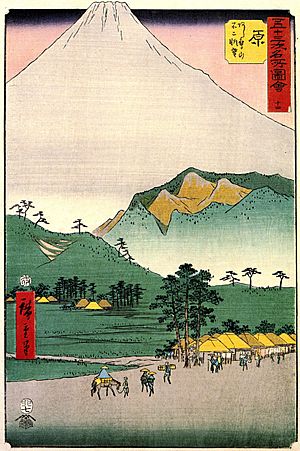 View of the extinct volcano Ashitakayama, woodblock print by Hiroshige

List of extinct volcanoes includes volcanoes which scientists consider unlikely to erupt again. A volcano which has not erupted in the past 10,000 years is often listed as extinct.

Volcanologists sometimes can't tell whether a volcano is extinct or dormant. A caldera that has not produced an eruption in tens of thousands of years is likely to be considered inactive. Dormant volcanos may still erupt, whereas extinct ones cannot.

There are many examples of extinct volcanoes.

All content from Kiddle encyclopedia articles (including the article images and facts) can be freely used under Attribution-ShareAlike license, unless stated otherwise. Cite this article:
List of extinct volcanoes Facts for Kids. Kiddle Encyclopedia.