Rylstone is a small town in New South Wales, Australia, in the Central Tablelands region within the Mid-Western Regional Council local government area. It is located on the Bylong Valley Way road route. At the 2006 census, Rylstone had a population of 615 people.

The name 'Rylstone' has no clear origin; however, several possible origins are promoted. 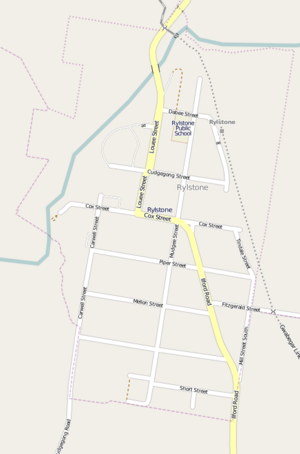 Rylstone Bridge during construction in 1948

Several early explorers and settler explorers travelled this area in the early 1800s; they include Samuel Marsden, Macquarie, Edward Cox, James Blackman Jr., Jamison, FitzGerald, John Nevell and James Vincent. Several mountains in the area commemorate their journeys through the Glen Alice Valley and up the Turon River. James Blackman jnr. explored a route from Bathurst to the Cudgegong River and present site of Rylstone in 1820. Allan Cunningham, the botanist and explorer, on his first expedition to find a route from Bathurst to the Liverpool Plains noted in his diary in November 1822 being in the Tabrabucka area and on the second expedition 18 April 1823 passing through Dabee (now Rylstone).

The district was originally known as Dabee (under various spellings). There are many contemporary newspaper references to the town being referred to as Ryalston in the period 1846 to mid-1850s then referred to as Ryalstone during the late 1850s. Rylstone town was laid out in 1846 by surveyor Davidson. By the 1850s Rylstone was becoming a well established town with post office, hotels, school, mills, and police lock-up. The Rylstone district was declared as a police district in 1854. Rylstone was formally proclaimed a town on 20 March 1885. 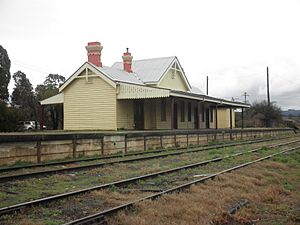 On 9 June 1884 the railway was opened to Rylstone, this changed the status of Rylstone village to that of a town. The railway yard included a goods shed, trucking yards, and turntable. Henry Lawsons father helped build the timber railway station. The line was extended from Rylstone to Mudgee and this section was opened on 10 September 1884. Rylstone is located on the Wallerawang to Gwabegar branch line.

In April 1895 a railway telephone line was installed between Wallerawang and Mudgee with Rylstone as an intermediate telephone point. The telephone was an important safety feature on this railway due to the steep cliffs and tunnels that occur on both sides of Rylstone allowing quick and clear communication of problems.

The railway line through Rylstone was closed on 2 March 1992 and remain closed for 8 years, the NSW Government spent $11 million to resleeper the track, repair bridges, and level crossings reopening the line on 2 September 2000, the line was again closed 7 years later on 30 June 2007, the line remains closed; however, there are plans to reopen the line for coal trains to operate between Cobbora Mine (near Dunedoo) and the Mount Piper Power Station and Wallerawang Power Station.

Four road bridges have spanned the Cudgegong River which flows through the town. The first bridge was a suspension bridge that was washed away by floods around 1867. This was followed by a second bridge of two spans built by a Mr Hayden soon after the flood. This second bridge was alongside the first bridge at the end of Hall Street. A third bridge built by Mr Eddy Fitzgerald replaced the second in 1890 and was a little further up the River. The fourth bridge, and the only one remaining, which is still used today was built in 1948 to line up with the Bylong Road. A railway bridge also spans the Cudgegong River approximately 100 metres upriver of the present road bridge. This apart from upgrading works, to add additional centre pillars, is the original structure built during the construction of the line.

By 1868 there were four Hotels, the Rylstone Hotel, Bridge View, Shamrock and the Globe. The Rylstone and Globe Hotels remain in business. The Shamrock Hotel was located on the southern side of the railway bridge and was built by Michael Hayes in 1885 closing in 1890.

The local indigenous Aboriginals were the Dabee tribe and they in turn were part of the broader Wiradjuri group of people. Some of the localities in the area are derivations of Aboriginal words.

One of the last full blooded Aborigines of the Rylstone area was Peggy Lambert wife of Jimmy Lambert, she was buried in the Aboriginal section of the Rylstone Cemetery in June 1884. Another local Aboriginal was Jimmy McDonald who was attached to the Rylstone Police station as a tracker.

The main commercial street, Louee Street, was originally an upper level and lower level street. In the 1930s the street was levelled and this created the high steps to the buildings on the high side of the road.

Other events in Rylstone history 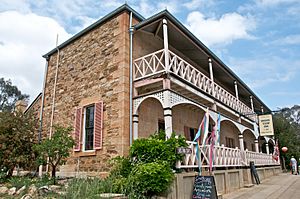 The Rylstone District was governed by a separate local government area known as the Rylstone Shire Council which was formed on 5 December 1906. Prior to that the area was administered by the Department of Public Works. In 2004 the New South Wales Government conducted an inquiry that found evidence of deteriorating finances as well as breaches of regulations in appointments and management of staff. It ruled all civic offices to be vacated and appointed an Administrator to manage Councils affairs. The Council's relatively small area was ultimately amalgamated with the Mudgee Shire Council in March 2006 to become the Mid Western Regional Council.

The town also has a police station where two officers are based, this station is under the control of the Mudgee Local Area Command, within the Western Region.

Energy supply to Rylstone is provided by Integral Energy, prior to this Turon County Council, and earlier Rylstone Shire Council provided the electricity infrastructure.

Television services are provided by the ABC, SBS, and commercial television broadcasting in the Central Tablelands and Central Western Slopes license area. The broadcasters in this license area are CBN10 (Prime Television), CTC63 (Southern Cross Television), WIN66 (WIN Television). The transmitters are located on Mount Coombermellon32°52′19″S 149°59′25″E﻿ / ﻿32.87194°S 149.99028°E﻿ / -32.87194; 149.99028. Due to the hilly terrain there are many terrestrial television reception black spots particularly to the north and east of Rylstone, these areas are within the Remote Central & Eastern Australia Broadcast Licence Area and the signal is received by satellite.

Rylstone has retained its original character buildings from its beginnings, a few buildings of note are the Bridge View Inn, the Globe Hotel, the post office, the police station, the courthouse and the shire hall. The old town granary was built in the early 1840s.

Rylstone is a popular venue for ultralight aviation, gyrocopters, and paragliding enthusiasts. The Rylstone Airstrip is used for this activity. The Airstrip was sold by the Mid Western Regional Council to a private individual who intends to keep the strip for aviation purposes.

Rylstone is becoming a popular destination for travellers on a new tourist route that has developed following the final sealing of the Bylong Valley Way. The sealing of the route was commenced in 1950 and only completed in April 2009. A large part of the Bylong Valley Way route lies between the Wollemi and Goulburn River National Parks, with majestic scenery and rich animal and bird life the route is becoming popular with weekend travellers. Business associations and local governments in the area are promoting the journey to develop the tourist potential. With the completion of the work Rylstone has seen a steady increase in tourists visiting its cafes, pubs, and bed and breakfast establishments. A route is now available from Sydney through the Hunter Region and return to Sydney via Rylstone providing a tourist loop.

The Rylstone area is rich in natural mineral resources including coal, it is located on the western coalfield which extends from near Lithgow to Rylstone. Rylstone is an undeveloped coal resource and one of the last to be exploited. Charbon Coal Mine is a working mine approximately 10 km to the south of Rylstone. Large reserves of coal are known to exist, which is mostly thermal coal suitable for local coal-fired power stations. The NSW Minerals Department states that this resource will be allocated for developed in the short-term future. Cement was produced at the nearby Kandos Cement Works using limestone and clay raw materials from a mine situated 5 km to the east of Kandos. Recent explorations have revealed prospective deposits of rare earth elements, a company is proposing further analysis of these mineral deposits.

The Rylstone and District Agricultural Show happens late February each year. The RDAS was formed and the first show was held on 17 April 1937. Prior to that, the Rylstone Horticultural Society formed 1 August 1892 ran shows, with the first show occurring 9 November 1892.

The Rylstone Street Feast is a food and wine event that occurs each November. Rylstone main street is closed and tables and stalls are set up along the street. The event showcases the region's produce.

All content from Kiddle encyclopedia articles (including the article images and facts) can be freely used under Attribution-ShareAlike license, unless stated otherwise. Cite this article:
Rylstone, New South Wales Facts for Kids. Kiddle Encyclopedia.