Division of Calare facts for kids 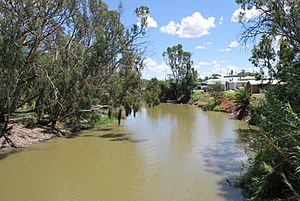 The Division of Calare is an Australian Electoral Division in New South Wales. It was set up for the 1906 election and is the local Indigenous Australian name for the Lachlan River, which runs through the western part of the division. (The name should be pronounced Kal-ah-ree, but the pronunciation Kul-air is used.)

Peter Andren was not a candidate for the 2007 election as he was going to stand for a Senate seat. He was diagnosed with cancer in 2007 and died during the election campaign. John Cobb had previously held the seat of Parkes. He was Minister for Citizenship and Multicultural Affairs and Minister for Community Services in the Howard Government.

All content from Kiddle encyclopedia articles (including the article images and facts) can be freely used under Attribution-ShareAlike license, unless stated otherwise. Cite this article:
Division of Calare Facts for Kids. Kiddle Encyclopedia.