Situated on the Belubula River, Canowindra (pronounced kə-NOWN-drə) is a historic township and largest population centre in Cabonne Shire and is located between Orange and Cowra in the central west of New South Wales, Australia. The curving main street, Gaskill Street, is partly an urban conservation area. At the 2016 census, Canowindra and the surrounding area had a population of 2,258.

A post office opened at Canowindra in 1847 with mail coming from Carcoar, but the village was handicapped as part of a main route to the lower Lachlan, first by the lack of a bridge and later by the construction of the railway to Orange. The first bridge across the Belubula River at Canowindra was opened on 28 July 1875. It was replaced by the Waddell Bridge in May 1901, and by the current John Grant Bridge in 1997.

In October 1863, Ben Hall's gang took over the village for three days and entertained the whole population, as well as some stray travellers, all herded into the inn. An account of the incident was reported in the Bathurst Times, also quoted in the Maitland Mercury. A monument to Ben Hall, on the site of Robinson's inn, the Travellers' Rest, was erected in 1951, but evidently further research has indicated that the events recorded here happened at the inn on the other side of the river.

Today the main street has an old-world air, with its kerbside verandah posts lining the dog-leg course of what was once a bullock team track.

The Royal Hotel is on the site of another inn owned by Robinson and the plaque on the wall indicates present day understanding that this was the inn where Ben Hall's gang had their spree. Other notable buildings include the nursing home, the Junction Hotel, Finn's Building, the Victoria Hotel, the former Bank of NSW and the former CBC Bank. The Trading Post, a homewares shop, won the inland tourism award for 2006. 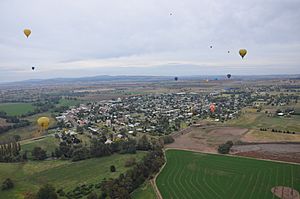 Balloons over Canowindra during the 2011 Australian Hot Air Balloon Championships

Canowindra is also popularly known as the Balloon Capital of Australia.

Canowindra International Balloon Challenge is the largest ballooning event in Australia and takes place in Canowindra every April. In 2010, the Canowindra Challenge created a local balloon event that has since grown to where the event now attracts pilots and balloons from around the globe to build upon the principles of Marti's Fiesta, bringing businesses together to support a week-long event of ballooning competitions and skill-based activities. The use of location-enabled (GPS), point-of-view camera technologies was combined with live-to-web broadcasts via an online streaming platform for viewers to share in the spectacle and to join in the event virtually and for free.

Canowindra also hosted the Australian National Balloon Championships in 2011, 2013 and 2014, creating a larger, more competitive event. In 2014, the event went fully international with pilots from Japan, US, Russia, Brazil and the UK competing. A balloon glow is held as part of the event along with a local food and wine market based on the 100-mile principle where the products must be made or produced within 100 miles of Canowindra. The last Sunday of the event also features a key grab where pilots test their skill in an attempt to grab a large key from the top of a 10 m pole.

For many years, an event known as Marti's Fiesta was held in Canowindra. It was primarily a fun event designed to bring together balloonists and spectators from local, national and international locations in a celebration of Central West hospitality and goodwill.

This event coincides with food and wine events which bring in the greater Cabonne and surrounding districts during the April period each year.

Canowindra is the site of one of the world's great fossil discoveries from the late Devonian period. A chance discovery by a road worker in 1956 uncovered a rich find of 360-million-year-old fish fossils, dating from the Devonian period in the Paleozoic era. The "Canowindra slab" was removed to the Australian Museum, Sydney. The fish had been buried when trapped in a pool of water that dried up, stranding two armoured antiarch placoderms, Remigolepis walkeri and Bothriolepis yeungae, and Canowindra grossi, a lobe-finned crossopterygian fish, with two rare juvenile arthrodire placoderms, Groenlandaspis species.

No further fossils had been recovered until January 1993, when a trial dig on the site using an excavator rediscovered the fossil stratum, where the mass mortality of fishes was preserved in detail (see Lagerstätte). Specimens can be viewed in the specially established The Age of Fishes Museum, with scientific support and funding from the Australian Museum. The Canowindra site has now been listed as part of Australia's National Heritage because of its international scientific importance.

All content from Kiddle encyclopedia articles (including the article images and facts) can be freely used under Attribution-ShareAlike license, unless stated otherwise. Cite this article:
Canowindra Facts for Kids. Kiddle Encyclopedia.