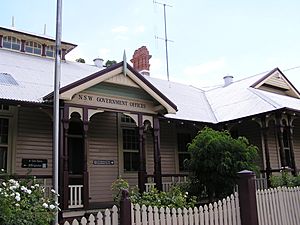 Lands Office at Forbes built 1898; an all timber building in the Federation style 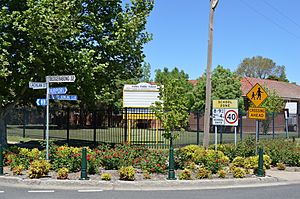 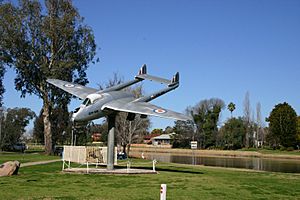 Forbes is a town in the Central West region of New South Wales, Australia, located on the Newell Highway between Parkes and West Wyalong. At the 2016 census, Forbes had a population of 8,432. Forbes is probably named after Sir Francis Forbes, first Chief Justice of NSW.

Located on the banks of the Lachlan River, Forbes is 245 metres (804 ft) above sea-level and about 380 kilometres (240 mi) west of Sydney. The district is a cropping area where wheat and similar crops are grown. Nearby towns and villages include Calarie, Parkes, Bedgerebong, Bundabarrah, Corradgery, Daroobalgie, Eugowra, Ooma North and Paytens Bridge. Forbes is subject to a pattern of flooding, generally occurring to a significant level once every seven years, including 2016.

The area was home to the Wiradjuri people before non-indigenous settlement. John Oxley passed through in 1817 during one of the first inland expeditions. Oxley named the site Camp Hill. He was unimpressed with the clay soil, poor timber and swamps and he concluded, it is impossible to imagine a worse country. The first settlers moved into the district in 1834.

Gold was discovered by Harry Stephens, also known as "German Perry", in June 1861. Initially about 30,000 people moved to the goldfields, but by 1863 this had declined to about 3,500 because of the difficult mining conditions.

The goldfields were originally named "Black Ridge", and the name "Forbes" celebrating Sir Francis Forbes was declared from Sydney as the result of a possible government administrative error, it is said that the name was meant for the town now known as "Hill End" between Orange and Mudgee, New South Wales where gold was discovered around a similar time. Gold was initially found in the area known as Halpin's Flat. The Albion Hotel, once a Cobb and Co. stage coach stop, had tunnels situated underneath which were used during the gold rush to convey gold and money to and from the banks to minimise the chance of theft. The Albion Hotel burnt down on 10 February 2009, losing years worth of history and memorabilia.

One of Australia's most renowned bushrangers, Ben Hall, was shot dead in gun battle about 20 kilometres (12 mi) to the north-west of town on 5 May 1865. Hall and his gang were famous for stealing 77 kilograms (170 lb) of gold and £3,700 from the nearby town of Eugowra in 1862. He is buried in the Forbes Cemetery.

Kate Kelly, the sister of bushranger Ned Kelly, lived in the town. She drowned in Lake Forbes while saving an Aboriginal child during a flood in 1898 and was found in a lagoon of the Lachlan River, just outside Forbes. She is buried in Forbes Cemetery.

The Stockinbingal–Parkes railway line passes through Forbes. Passenger trains operated to Forbes until 1983. Forbes lies at or near the confluence of the Newell Highway, the Lachlan Valley Way and Henry Lawson Way.

Forbes lies in the transitional zones of the semi-arid climate (BSh) and humid subtropical climates (Cfa), with relatively large temperature variation between seasons and mild rainfall spread evenly throughout the year. Extreme temperatures have ranged from 47.8 °C (118.0 °F) to −5.6 °C (21.9 °F).

Forbes' most recent major flood event was in late September 2016 after heavy rain fell on much of inland NSW; as the Bureau of Meteorology declared 2016 as the third-wettest winter on record. Unseasonal heavy rainfall in most of the state, centred on the catchment area of the upper Lachlan during autumn and winter 2016, resulted in Wyangala Dam water storage levels increasing from 38 per cent to 90 per cent. By early August, the Bureau of Meteorology had issued flood warnings for the Orara, Macquarie, Bogan and Lachlan rivers. In late August, Water NSW began releasing up to 10,000 megalitres (350×10^6 cu ft) per day from Wyangala Dam ahead of expected daily rainfall in the range of 20 to 40 millimetres (0.79 to 1.57 in) in the dam's catchment area. Moderate to major flooding first hit Forbes and Condobolin in early September, and by mid-September predictions were for widespread flooding across most of inland New South Wales. By late September, flooding had peaked in Forbes at 10.67 metres (35.0 ft), with 1,000 people evacuated, as the Newell Highway was cut north and south of Forbes' central business district. Forbes was declared a natural disaster zone after flash flooding occurred, resulting in some residents being without homes. Back up support was provided by the State Emergency Service and the Australian Defence Force. As the Lachlan flowed into the Murrumbidgee River, major flooding occurred downriver during late October and early November at Hay, Darlington Point, Carrathool and Hillston.

The Forbes Camel Races have been held annually since 2001 on Good Friday at the Forbes Racecourse.

Forbes High School, a public school, is located to the north of town.

Red Bend Catholic College at Forbes is a co-educational secondary school, with the school located at the site of the former Marist Brothers' College, on the banks of the Lachlan River.

Local tertiary institutions are the Forbes College of Technical and Further Education (TAFE) and the Forbes Conservatorium.

All content from Kiddle encyclopedia articles (including the article images and facts) can be freely used under Attribution-ShareAlike license, unless stated otherwise. Cite this article:
Forbes, New South Wales Facts for Kids. Kiddle Encyclopedia.