West Wyalong is the main town of the Bland Shire in the Riverina region of New South Wales, Australia. Located 467 kilometres (290 mi) west of Sydney and 262 m (860 ft) above sea level, it is situated on the crossroads of the Newell Highway between Melbourne and Brisbane, and the Mid-Western Highway between Sydney and Adelaide.

The West Wyalong district is the largest cereal-growing centre in NSW. Eucalyptus oil production started in 1907 and the West Wyalong area became one of the major world exporters of the product. 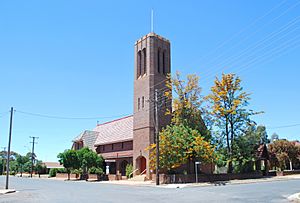 Gold was discovered at Wyalong in September 1893 by Joseph Neeld. In 1895 West Wyalong was developed 5 kilometres (3 mi) from Wyalong around the bullock track, without the benefit of town planning, resulting in curious kinks in the road where it avoided trees. As well as the mines, the White Tank water supply was located here. This is now the location of McCann Park The goldfield was declared the most productive in the colony in 1899.

As mining declined West Wyalong became the main service centre for agriculture in the surrounding district, although for many years there was rivalry between the towns. Both towns wanted the Temora railway line, but settled on a compromise of a station midway between the two towns, called Wyalong Central.

Development since the 1970s has expanded Wyalong in the direction of West Wyalong with several motels built at Central Wyalong. A shared bicycle and pedestrian track was constructed in 1994 to link Wyalong with West Wyalong.

The population has stabilised recently. This is due, in part, to the Cowal Gold Mine adjacent to Lake Cowal, 45 km northeast and Pace Farm's egg production facility.

West Wyalong Movies is a project by Ross Harmer aimed at documenting the history of West Wyalong and The Bland Shire.

Pubs and clubs in West Wyalong 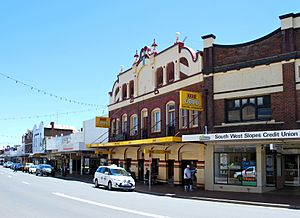 The town's rugby league team competed in the Maher Cup.

Notable people from the area

All content from Kiddle encyclopedia articles (including the article images and facts) can be freely used under Attribution-ShareAlike license, unless stated otherwise. Cite this article:
West Wyalong Facts for Kids. Kiddle Encyclopedia.