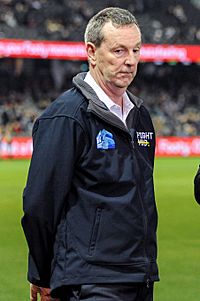 Neale Francis Daniher AM (born 15 February 1961) is a former Australian rules footballer. He played for Essendon Football Club in the Australian Football League (AFL) from 1979 to 1990. He later coached Melbourne Football Club between 1998 and 2007. He also had coaching roles with Essendon, Fremantle and West Coast. His brothers, Terry, Anthony and Chris, also played for Essendon. He was born in West Wyalong, New South Wales.

Daniher was told he had motor neurone disease in 2013. He is now a campaigner for medical research of the disease.

All content from Kiddle encyclopedia articles (including the article images and facts) can be freely used under Attribution-ShareAlike license, unless stated otherwise. Cite this article:
Neale Daniher Facts for Kids. Kiddle Encyclopedia.