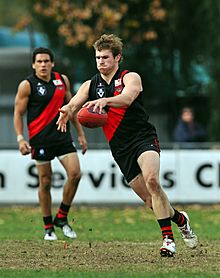 The Essendon Football Club, the Bombers, is an Australian Rules Football team which plays in the Australian Football League (AFL). The club began in 1872, and played its first game in 1873 against Carlton. In 1877, the team joined the Victorian Football Association.

Essendon was one of the original teams in the Victorian Football League (VFL) which began in 1897. The other teams were Collingwood, Fitzroy, Melbourne, St Kilda, Carlton, South Melbourne and Geelong). Its first home ground was the East Melbourne Cricket Ground, and at the end of the 1921 season the club moved to the Essndon Recreation Reserve, known as Windy Hill. In 2000, the club moved its home ground to Etihad Stadium.

All content from Kiddle encyclopedia articles (including the article images and facts) can be freely used under Attribution-ShareAlike license, unless stated otherwise. Cite this article:
Essendon Football Club Facts for Kids. Kiddle Encyclopedia.