The Collingwood Football Club, nicknamed the Magpies or less formally the Pies, is an Australian rules football club which plays in the Australian Football League (AFL). Formed in 1892, the club was named after the inner-Melbourne suburb and city of Collingwood, and was originally based at Victoria Park in Abbotsford; the club is now based in the nearby Melbourne Sports and Entertainment Precinct in Melbourne, playing its home games at the Melbourne Cricket Ground and with its training and administrative base at Olympic Park Oval and the Holden Centre.

Collingwood is the most supported club in the AFL, and has consistently attracted much higher than average crowds to its home games than other clubs in the league, and had a league record of 71,516 members in the 2011 season. This spike in membership registration can mainly be attributed to the winning of the 2010 AFL Premiership. This record was again broken in 2013, with club reaching a new high of 80,000 members. Collingwood is regarded as one of Australia's most popular clubs, being the highest attended and most viewed professional sports club in the nation.

Collingwood's home guernsey consists of black and white stripes, matching the colours of an Australian magpie. Throughout its history, the club has developed rivalries with cross-town Melbourne based clubs Carlton, Richmond, Essendon and the Brisbane Lions despite being based two states away.

Historically one of the most successful clubs in the league, Collingwood has won 15 VFL/AFL premierships, the third-most of any team. Collingwood has played in a record 43 grand finals (including replays), winning 15, drawing two and losing 26 (also a record). Collingwood played its first game in the Victorian Football Association (VFA) against on 7 May 1892. The club won the VFA Premiership in 1896. 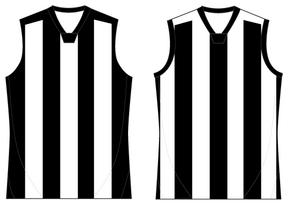 Teams of the Collingwood Football Club have, throughout the club's history, worn guernseys of black and white vertical stripes. The all white jumper, with the three black vertical stripes is the iconic strip that the club is most associated with. The current incarnation of the guernsey is mostly black, with white stripes on the front and lower half of the back, and white numbers. The main clash guernsey is the reverse of this: mostly white, with black stripes and black numbers, worn in away matches against clubs with a predominantly dark guernsey.

"Good Old Collingwood Forever" is the team song of the Collingwood Football Club. It is sung to the tune of "Goodbye, Dolly Gray", a popular Boer War and First World War song. The current version of the song played at the ground was recorded in 1972 by the Fable Singers.

The Club is traditionally reviled by non-Collingwood supporters ("You either love 'em or you hate 'em"). The dislike of the club by outsiders is said to have originated during the 1920s and 1930s, a period of great success for the club which drew the envy and resentment of other clubs. 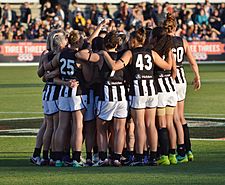 The Collingwood team huddles prior to the inaugural AFL Women's match in February 2017.

In April 2016, the club launched a bid to enter a team in the inaugural AFL Women's season in 2017. Meg Hutchins was appointed Women’s Football Operations Manager some weeks prior, and given the responsibility of crafting the bid.

The club was granted a license in June 2016, becoming one of eight teams to compete in the league's first season.

In addition to her role off-field, Hutchins would become one of the club's first players, along with marquees Moana Hope and Emma King. Collingwood selected a further 19 players in October's inaugural draft as well as three non-drafted players and two first time footballing rookies.

The team operates its training and administration base within the existing Collingwood home at Olympic Park.

All content from Kiddle encyclopedia articles (including the article images and facts) can be freely used under Attribution-ShareAlike license, unless stated otherwise. Cite this article:
Collingwood Football Club Facts for Kids. Kiddle Encyclopedia.