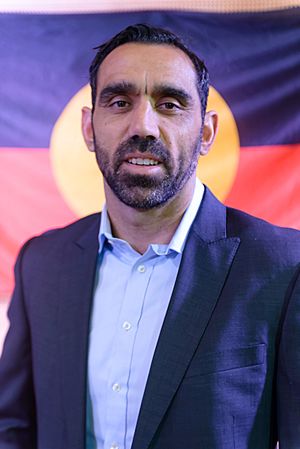 Adam Roy Goodes (born 8 January 1980) is a former professional Australian rules footballer. He played for the Sydney Swans in the Australian Football League (AFL). He won two Brownlow Medals (2003 and 2006) and two premierships (2005 and 2016). He has played more VFL/AFL games than any other Indigenous player at 372. He is also known for his community work through the GO Foundation and advocacy against racism. Goodes was named Australian of the Year in 2014.

Goodes was born in Wallaroo, South Australia. His father is of English, Irish and Scottish ancestry, and his mother is an Indigenous Australian (Adnyamathanha and Narungga). From the age of four, he was raised by his mother. He grew up in Wallaroo and Adelaide, South Australia, and Merbein, Victoria. His brother, Brett, is also a former Australian rules player. He is married to Natalie Croker.

All content from Kiddle encyclopedia articles (including the article images and facts) can be freely used under Attribution-ShareAlike license, unless stated otherwise. Cite this article:
Adam Goodes Facts for Kids. Kiddle Encyclopedia.