He began his career in the sketch comedy series Full Frontal before his first movie, comedy-drama The Castle (1997), got him noticed by global audiences.

After a decade of roles in Australian TV shows and films, Bana gained Hollywood's attention for his performance in the war film Black Hawk Down (2001) and the title character in Hulk (2003). He has since played Hector in the movie Troy (2004), the lead in Steven Spielberg's historical drama and political thriller Munich (2005), Henry VIII in The Other Boleyn Girl (2008), and the villain Nero in the science-fiction film Star Trek (2009). Bana also played Henry De Tamble in The Time Traveler's Wife (2009). In 2013, he played Lt. Cmdr. Erik S. Kristensen in the war film Lone Survivor and in the following year he played police sergeant Ralph Sarchie in the horror film Deliver Us from Evil.

An accomplished dramatic actor and comedian, he received Australia's highest film and television awards for his performances in Chopper, Full Frontal and Romulus, My Father. Bana has performed across a wide spectrum of leading roles in a variety of low-budget and major studio films, ranging from romantic comedies and drama to science fiction and action thrillers. 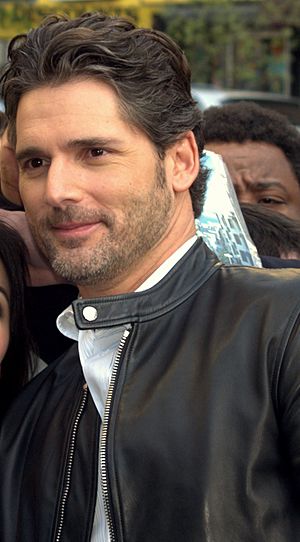 Bana posing with fans at the 2009 Tribeca Film Festival

In 1995, while working on the television series Full Frontal, Bana began dating Rebecca Gleeson, a publicist with the Seven Network and daughter of then Chief Justice of New South Wales, and later Chief Justice of Australia, Murray Gleeson. They married in 1997.

Bana and Gleeson have two children, a son, Klaus (born August 1999), and a daughter, Sophia (born April 2002). They are based in Melbourne.

On official identity documents he still has his birth surname, Banadinović.

All content from Kiddle encyclopedia articles (including the article images and facts) can be freely used under Attribution-ShareAlike license, unless stated otherwise. Cite this article:
Eric Bana Facts for Kids. Kiddle Encyclopedia.