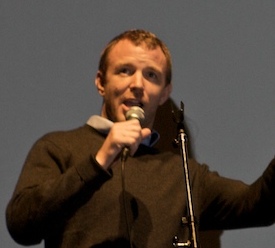 Guy Ritchie (born 10 September 1968) is a British movie director. He was born in Hatfield, Hertfordshire.

Ritchie had a son with Madonna in August 2000. They were married from December 2000 until they divorced in December 2008. He lives with model Jacqui Ainsley (born 1981). The couple have a son, who was born in September 2011.

All content from Kiddle encyclopedia articles (including the article images and facts) can be freely used under Attribution-ShareAlike license, unless stated otherwise. Cite this article:
Guy Ritchie Facts for Kids. Kiddle Encyclopedia.