David Jude Heyworth Law (born 29 December 1972) is an English actor. He has received nominations for two Academy Awards, two Screen Actors Guild Awards, four Golden Globe Awards, and two British Academy Awards, winning one. In 2007, he received an Honorary César and was named a knight of the Order of Arts and Letters by the French government, in recognition of his contribution to World Cinema Arts.

Law came to international attention for his role in Anthony Minghella's The Talented Mr. Ripley (1999), for which he won the BAFTA Award for Best Actor in a Supporting Role and was nominated for the Golden Globe Award and the Academy Award for Best Supporting Actor.

Law has also had an accomplished career on stage, and has received nominations for three Laurence Olivier Awards and two Tony Awards. He has performed in several West End and Broadway productions.

Law was born in Lewisham, South London. He grew up in Blackheath, an area in the Borough of Greenwich, and was educated at John Ball Primary School in Blackheath and Kidbrooke School, before attending Alleyn's School.

In 2006, he joined Robbie Williams in the "Soccer Aid" celebrity football match to benefit UNICEF, also in 2006, he starred in readings of Samuel Beckett at the Beckett Gala Evening at the Reading Town Hall, more than £22,000 was donated for the Macmillan Cancer Support.

In 2007, he encouraged the Friends of the Earth/the Big Ask campaign, asking British government to take action against climate change.

Law does charity work for organisations such as Make Poverty History, the Rhys Daniels Trust, and the WAVE Trauma Centre. He supports the Make-A-Wish Foundation and the Pride of Britain Awards. 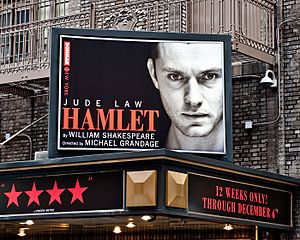 He is the chairman of the Music For Tomorrow Foundation to help rebuild Katrina-devastated New Orleans.

Law serves as an ambassador of the Prince of Wales' Children and the Arts Foundation. He supports Breast Cancer Care, and in December 2008 he supported the Willow Foundation.

Law, alongside Judi Dench, helped save St Stephen's Church in Hampstead. They supported the campaign, which raised £4.5 million to refurbish the Victorian church in North London. The building reopened in March 2009 as an arts and community centre.

All content from Kiddle encyclopedia articles (including the article images and facts) can be freely used under Attribution-ShareAlike license, unless stated otherwise. Cite this article:
Jude Law Facts for Kids. Kiddle Encyclopedia.