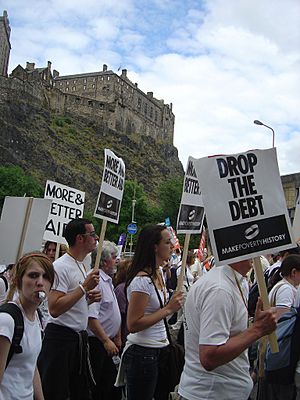 Make Poverty History is a British and Irish campaign that wants to stop people from being poor and to help richer people learn about the poor people of the World. The symbol of the campaign is a white "awareness wristband" made of cotton or silicone with the words written in dark black and the word 'poverty' written in light black (e.g.: 'MAKEPOVERTYHISTORY').

All content from Kiddle encyclopedia articles (including the article images and facts) can be freely used under Attribution-ShareAlike license, unless stated otherwise. Cite this article:
Make Poverty History Facts for Kids. Kiddle Encyclopedia.