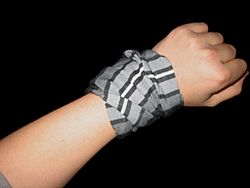 A wristband is a piece of clothing, plastic, metal or other material that is worn around the wrist of a person. There are different types of wristband such as those on watches and on the ends of the sleeves of a piece of clothing. Other types are the awareness bands and security bands used for music concerts and school dances.

Bracelet on a watch

Many people wear wristbands when they exercise or play sports to absorb sweat.

In 2009 a new Sweatband was invented, primarily designed for runners, called a sQoosh® band. This groundbreaking design completely changed the look of sweatbands. Worn on the hand to precisely wipe sweat from the eyes and face, these bands join moisture wicking material to stretch terry cloth. sQoosh brands revolutionized the old-fashioned sweatband market with a new favorite for runners in the 21st century. Similarly designed hand-sweatbands started appearing on the market in 2012.

Charities and awareness organizations often make wristbands that are sold to people so that the money can help people who are sick or need other help, and to help other people learn about their charity or awareness organization. Some bands are those made for; Make Poverty History, Anti-bullying, disease awareness charities and to help people learn about religions (such as the Jesus Loves Me band). These bands are often made of plastic or silicone. The making of some of these bands has been in the news as some were made in sweatshops in China and poor countries. This is said to be very bad because these wristbands are made to help people and charities and by being made in these sweatshops they have hurt the people making them because these places are often not safe, and the people working in them do not get paid much money for work they do.

Awareness wristbands were first started by the Lance Armstrong charity Livestrong (see Other websites) in 2003.

Some of these wristbands are copied by criminals and sold to people without the money going to the organization they are trying to help.

Wristbands are often used at music events like concerts and sports event to show that the person wearing them has paid to be there. Some events let people leave and return during the event. Security wristbands allow the person to come back in to the event after they have given their ticket to the staff the first time they entered.

Sometimes safety wristbands have been used to give to both a parent and child to make sure that only the parent can take the child home from an event. Both of their wristbands have the same number on them and this stops someone else from taking the child.

Hospitals also use wristbands on patients so that they know who they are because patients don't carry identification with them when they are in the hospital.

Some local governments have thought about using wristbands given to young people to let them buy alcohol in town pubs and bars.

All content from Kiddle encyclopedia articles (including the article images and facts) can be freely used under Attribution-ShareAlike license, unless stated otherwise. Cite this article:
Wristband Facts for Kids. Kiddle Encyclopedia.