Near field communication facts for kids 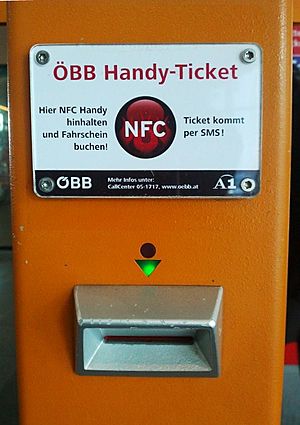 Tickets can also be validated using NFC technology with this machine from the Austrian State Railways. If a NFC capable mobile phone is held to the spot saying "NFC", an SMS message with a ticket will be sent.

Near field communication (often shortened to NFC) is the name for a standard that uses radio communication technology to send data over short distances. Usually, the distance covered is in the order of four centimeters. The standard is mostly used for micropayment systems. Another common use is to store tickets, such as those used for trains and buses on a re-usable smartcard. Many universities equip their student ID cards so they can be used to pay small amounts, for example a cup of coffee in a cafeteria.

Each device is either active or passive; some can assume both roles.

All content from Kiddle encyclopedia articles (including the article images and facts) can be freely used under Attribution-ShareAlike license, unless stated otherwise. Cite this article:
Near field communication Facts for Kids. Kiddle Encyclopedia.