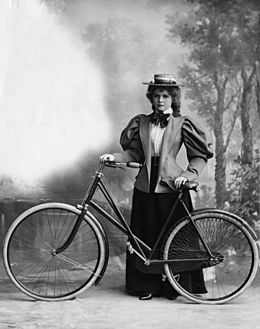 A sleeve (O. Eng. slieve, or slyf, a word allied to slip, cf. Dutch sloof) is the part of a garment that covers the arm, or through which the arm passes or slips. The pattern of the sleeve is one of the characteristics of fashion in dress, varying in every country and period. Various survivals of the early forms of sleeve are still found in the different types of academic or other robes. Where the long hanging sleeve is worn it has, as still in China and Japan, been used as a pocket, whence has come the phrase to have up one's sleeve, to have something concealed ready to produce. There are many other proverbial and metaphorical expressions associated with the sleeve, such as to wear one's heart upon one's sleeve, and to laugh in one's sleeve.

Sleeve length varies from barely over the shoulder (cap sleeve) to floor-length. Most contemporary shirt sleeves end somewhere between the mid-upper arm and the wrist.

Early medieval sleeves were cut straight, and underarm triangle-shaped gussets were used to provide ease of movement. In the 14th century, the rounded sleeve cap was invented, allowing a more fitted sleeve to be developed.

Often the names applied to sleeves in historical costume are modern.

All content from Kiddle encyclopedia articles (including the article images and facts) can be freely used under Attribution-ShareAlike license, unless stated otherwise. Cite this article:
Sleeve Facts for Kids. Kiddle Encyclopedia.