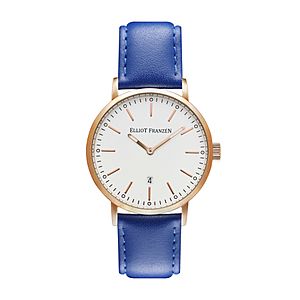 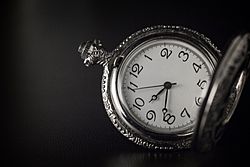 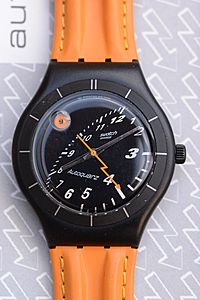 A watch is a small clock carried or worn by a person. It makes it easy to see the time. It is also a fashion accessory for men and women, and expensive watches are designed for this purpose. A watch may be one of the few accessories worn by a person.

A wristwatch is designed to be worn on a wrist, attached by a strap or other type of bracelet. A pocket watch is to be carried in a pocket. There are other variations. Nurses often wear a watch attached to the front of their uniform. It hangs down from a short strap: when lifted by the user it is right side up.

A wrist watch has the advantage of being portable in comparison to traditional watches.

Watches evolved in the 17th century from spring-powered clocks, which appeared as early as the 14th century. In 1524, Peter Henlein created the first pocket watch. The first watches were strictly mechanical, driven by clockwork.

As technology developed, mechanical watches were largely replaced by vibrating quartz crystals, producing accurately timed electronic pulses. Some watches use radio technology to correct the time and date. The first digital electronic watch was developed in 1970.

Electronic movements, also known as quartz movements, have few or no moving parts, except a quartz crystal which is made to vibrate by the piezoelectric effect. A varying electric voltage is applied to the crystal, which responds by changing its shape so it works as an oscillator. It resonates at a stable frequency, which paces a timekeeping mechanism. Most quartz movements are primarily electronic but are geared to drive mechanical hands on the face of the watch to give a traditional analog display of the time. Most consumers prefer this.

Some watches are smartwatches, mobile devices similar to smartphones but smaller.

All content from Kiddle encyclopedia articles (including the article images and facts) can be freely used under Attribution-ShareAlike license, unless stated otherwise. Cite this article:
Watch Facts for Kids. Kiddle Encyclopedia.