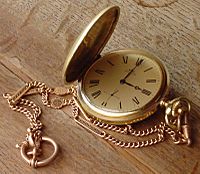 A pocket watch is a timepiece that is kept in the pocket rather than worn on a wrist (wristwatch). It is thought to be invented by Peter Henlein.

The pocket watch usually has a chain to connect to a certain clothing, so the watch would not fall out of the pocket and get broken. This watch was popular before the wristwatch become popular. Because of wristwatches, the pocket watch became less common and popular. Still, some people today wear pocket watches, and a golden pocket watch is often a token of a person's retirement.

All content from Kiddle encyclopedia articles (including the article images and facts) can be freely used under Attribution-ShareAlike license, unless stated otherwise. Cite this article:
Pocket watch Facts for Kids. Kiddle Encyclopedia.